GENESEO – The Livingston County Drug Task Force arrested a Rochester resident for allegedly sending over 25 pounds of marijuana to a Geneseo address.

According to a press release from the Drug Task Force, Tony Huynh, 43, was arrested for felony Criminal Possession of Marijuana in the First Degree.

On Oct. 24, the Livingston County Drug Task Force members initiated a joint investigation with the United States Postal Service in Rochester concerning large quantities of marijuana being shipped from California to a residence in the Village of Geneseo. It is believed that the suspect had trafficked more than 100 pounds of marihuana into Livingston County prior to the investigation.

The packages were tracked from California and then delivered locally on Oct. 27. The suspect picked the package up from the private residence and was immediately arrested by DTF members. The suspect was found to be in possession of more than 25 pounds of marijuana.

The suspect, Huynh, was taken into custody without incident. The Geneseo Police Department ultimately filed the charges.

The investigation is continuing by members of the DTF.

“If you have information regarding the sale of illegal drugs in Livingston County, please be our partner in combating these dealers by providing us valuable information at 243-7100 or you can leave a tip at www.livingstoncounty.us/sheriff under the TAKE ACTION, TIP LINE,” said the DTF. “You may remain anonymous if you wish.” 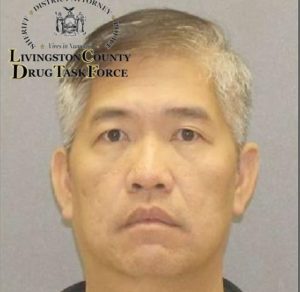