The Provost’s Office and the Bertha V.B. Lederer Gallery has invited Dr. Annie Storr to the SUNY Geneseo campus where she will present a lecture Tuesday evening on Ellen Gates Starr, co-founder of the Hull House in Chicago.

An extraordinary person whose legacy should be acknowledged. This presentation is of interest to all engaged in late 19th century issues, challenges, including 19th reform movement, education, politics, social justice and more. Starr is an example of one woman who worked to shape a better future for the poor and working classes.

Ellen Gates Starr, co-founder of Hull House with Jane Addams, Arts and Crafts artist with direct London training, she was also an essayist, political candidate, labor organizer, and education innovator. Starr joined Jane Addams on a tour of Europe in 1888. While in London, the pair were inspired by the success of the English Settlement movement and became determined to establish a similar social settlement in Chicago. When they returned to Chicago in 1889, they co-founded Hull House as a kindergarten and then a day nursery, an infancy care center, and a center for continuing education for adults. In 1891, Starr created the Butler Art Gallery as the first addition to the Hull
mansion. She travelled to England to study with the famed bookbinder, T. J. Cobden-Sanderson and on her return she established a bookbindery class at the settlement house in 1898 and established an arts and crafts business school. 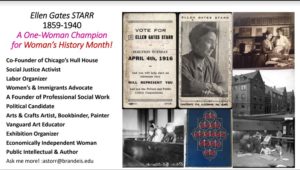