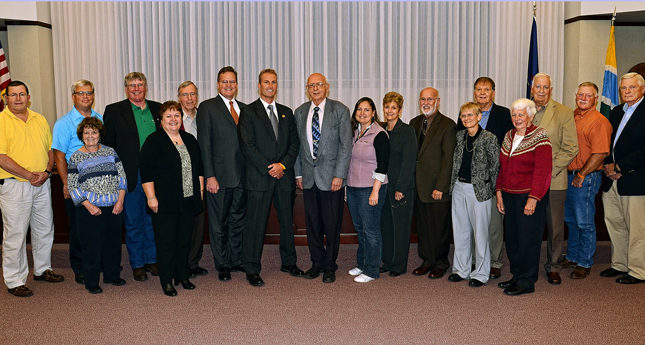 LIVINGSTON COUNTY — On Wednesday night it was business as usual with a little twist at the Republican Committee organizational meeting. The committee elected long time Chairman Lowell Conrad to another term and addressed the divide in the party after a difficult Livingston County Sheriff's primary. "We will get through this, we have gotten through it before and when it is all said and done it will be business as usual."  Conrad … END_OF_DOCUMENT_TOKEN_TO_BE_REPLACED

LIVINGSTON COUNTY — The Board of Elections and representatives from each candidate in the Livingston County Sheriff's Race were present this morning to rule on three affidavit ballots cast in last week's Conservative Party Sheriff's Primary which previously ended with Jim Szczesniak having a 1 vote lead over Tom Dougherty. After the count the race now rests at a tie. After accepting One of the three votes, which was for Tom Dougherty, the … END_OF_DOCUMENT_TOKEN_TO_BE_REPLACED

LIVINGSTON COUNTY — The ballot bags have been opened and although the Republican line is no longer in doubt, the Conservative line could potentially change with there being three affidavit ballots unopened. Three conservative party ballots were accepted by Livingston County Board of Election officials, along with representatives from the Livingston county Sheriff candidates along with 28 Republican ballots. According to the Livingston … END_OF_DOCUMENT_TOKEN_TO_BE_REPLACED

UPDATE: 11:39 LIVINGSTON COUNTY — Livingston County Sheriff Investigator Tom Dougherty has announced his candidacy for Sheriff in the November, 2013 election.The long-term incumbent, Sheriff John York, has not yet announced if he will be seeking re-election.“My combined experience of over sixteen years in the public and the private sectors gives me a unique outlook on managing a county department,” Dougherty said. In his announcement, Dougherty, … END_OF_DOCUMENT_TOKEN_TO_BE_REPLACED