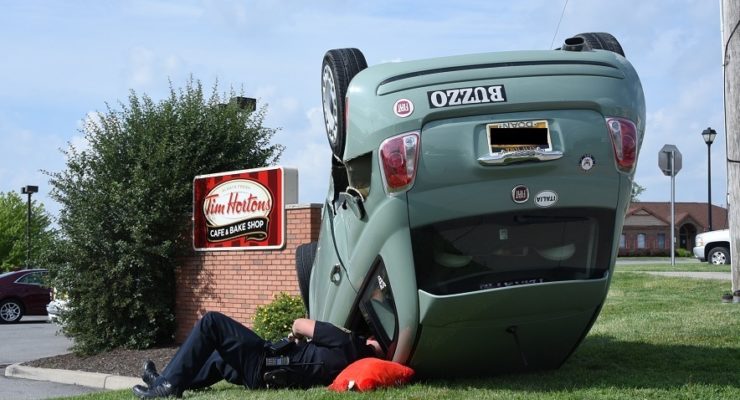 GENESEO – Investigating Geneseo Police Officers determined that a weird twist resulting from a collision with an SUV knocked a Fiat onto its roof late Friday afternoon. According to Geneseo Police Chief Eric Osganian, the actual collision at about 4:50 p.m. was minor. "The Fiat was westbound on 20A and the SUV pulled out of Ryan Drive and clipped the Fiat," said Osganian. "The Fiat spun out of control, hit the curb, and flipped over." No … END_OF_DOCUMENT_TOKEN_TO_BE_REPLACED 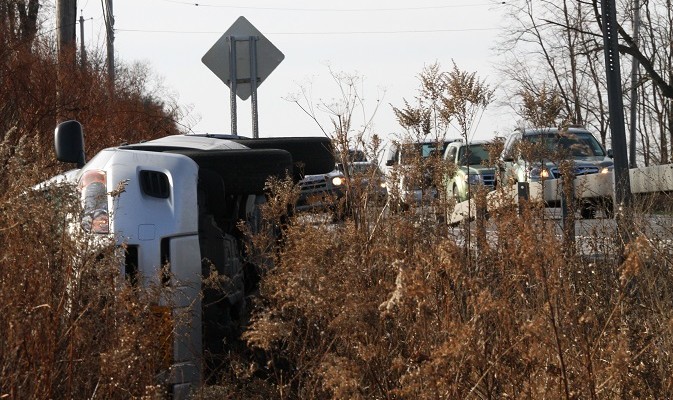 GENESEO – An SUV ran off of Rte. 20A (Lakeville Road), struck the end of a guard rail and rolled over at about noon on Sunday. According to first responders on scene, a vehicle was stopped and waiting to turn left into St. Timothy Lutheran Church from the northbound lane of Lakeville Road between North Road and Pole Bridge Road when the male driver and only occupant of a Toyota RAV4 was moving too quickly down the hill, braked, and swerved off … END_OF_DOCUMENT_TOKEN_TO_BE_REPLACED 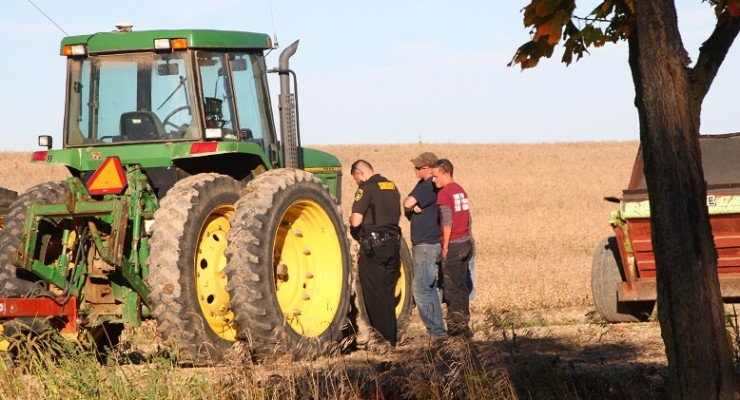 CALEDONIA – An SUV and farm tractor collided as they tried to pass each other on Barks Road in Caledonia late Monday afternoon. Fortunately, no one was seriously injured. The only occupant of the SUV reported a minor mouth injury. The tractor was hauling a large field roller at the time of the accident. The driver of the SUV tried to pass the tractor on Barks Road near the Caledonia Country Club but clipped its right side. The driver … END_OF_DOCUMENT_TOKEN_TO_BE_REPLACED 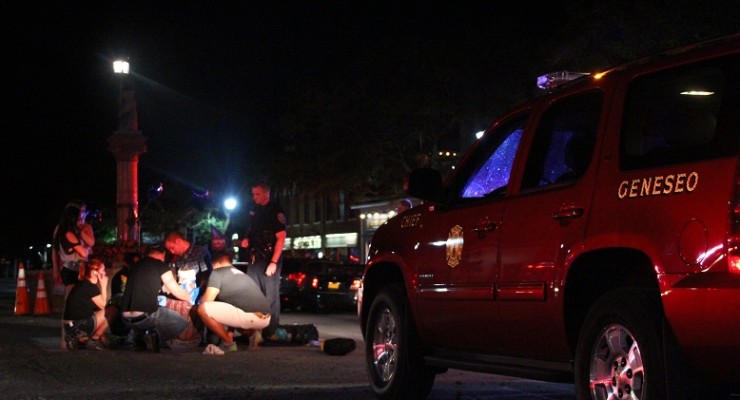 GENESEO – A middle-aged man was struck by an SUV while crossing Main Street on a crosswalk near the bear fountain Friday night. According to first responders on scene, the man is in his late fifties to early sixties and suffered non-life-threatening injuries as a result of the accident. The SUV was headed north at a low speed on Main Street negotiating the bear fountain just after 10:50 p.m. on Friday.when it collided with the … END_OF_DOCUMENT_TOKEN_TO_BE_REPLACED 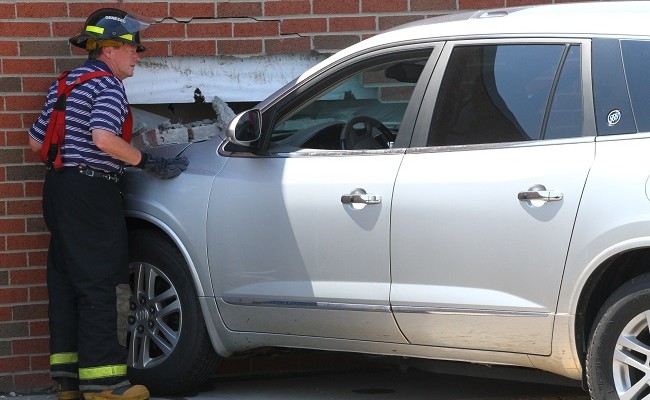 GENESEO – A Buick Enclave collided with the north facing wall of Aldi Wednesday afternoon when the driver apparently attempted to park in a handicapped spot. First responders on scene said that neither the elderly female driver of the vehicle nor her elderly male passenger were injured in the accident, and witnesses said that the driver may have had her flip-flop stuck on the gas pedal when she tried to park. "They were saying that her … END_OF_DOCUMENT_TOKEN_TO_BE_REPLACED 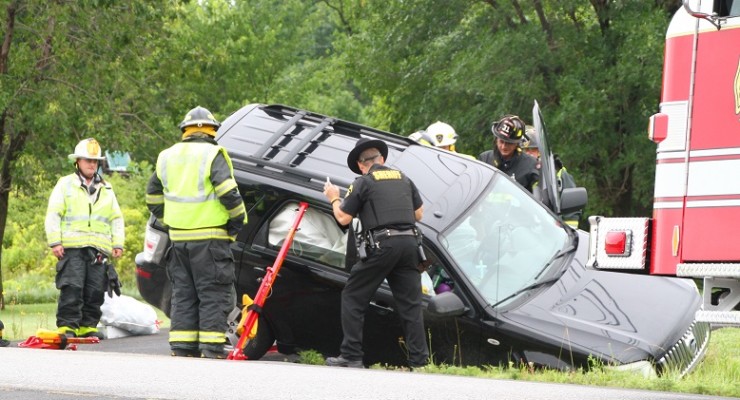 GENESEO – Three adults and three children were the victims of a rollover accident Wednesday morning on Lakeville Road between Country Club Road and North Road. Just after 10 a.m., first responders arrived at the scene to help the driver and front seat passenger, both adults, escape from their vehicle, a Mercury Mariner. Three children could be seen standing by the vehicle with another adult as the two trapped adults were freed. The trapped … END_OF_DOCUMENT_TOKEN_TO_BE_REPLACED 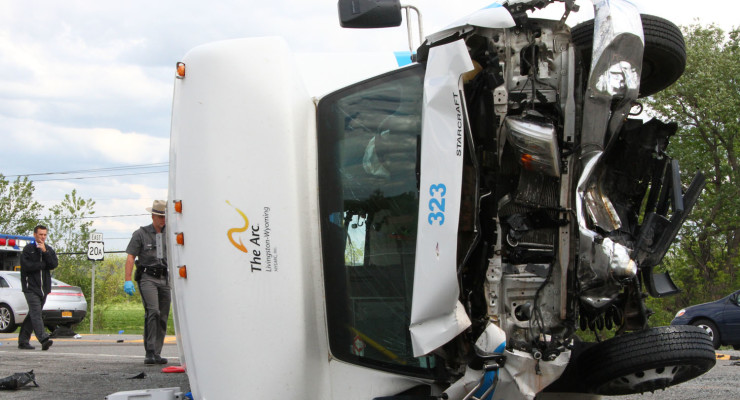 GENESEO – Multiple people have been injured in a collision between an Arc of Livingston-Wyoming bus carrying numerous passengers and a blue SUV carrying two occupants at about 2:30 p.m. Friday afternoon near I-390 Exit 8 on Rte. 20A. Several village ambulance crews are on scene transporting multiple victims with serious injuries, and according to first responders on scene one victim sustained critical injuries. Some elderly victims were … END_OF_DOCUMENT_TOKEN_TO_BE_REPLACED 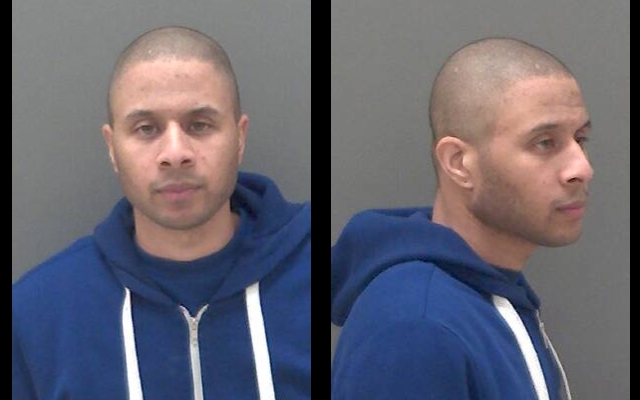 GENESEO  A Geneseo man was arrested late Wednesday night on several charges after allegedly fleeing from his girlfriend's house in a car, taking their two year old son in common with him. According to a press release from Livingston County Sheriff Thomas Dougherty, on Jan. 28 at approximately 11:58 p.m., Nathan May Jr., 32, had been involved in a physical altercation with the victim in the vicinity of April Way, and fled the scene in a black … END_OF_DOCUMENT_TOKEN_TO_BE_REPLACED