AVON – A Bath resident allegedly started showing signs that his body was absorbing hidden drugs on 390, which led to his arrest for felony heroin and crack possession.

On Jan. 20 at approximately 5 p.m., Deputy Shawn Whitford stopped a vehicle on 390 in the Town of Avon for ‘numerous Vehicle and Traffic Law violations.’

Police found the driver to be operating the vehicle with a driver’s license that had been suspended five times. Deputies detained Crosson while they investigated the violations.

The Deputy then allegedly discovered that Crosson concealed drugs on his person and ‘began showing symptoms of his body absorbing the drugs.’ As a result, an ambulance was called to the scene. Crosson was transported to a hospital for treatment and while there, the drugs were recovered. In his possession were what are believed to be three bags of heroin and one bag of crack cocaine.

Upon Crosson’s release from the hospital, Deputy Mike Wade and Deputy Mike Miller arrested him on a warrant.

Crosson was turned over to Central Booking Deputies at the Livingston County Jail for processing and pre-arraignment detention. 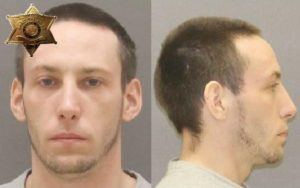