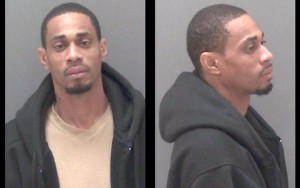 GENESEO – U.S. Marshals caught an escaping overdose patient after he allegedly walked out of the University of Rochester Medical Center on Thursday.

According to our news partner 13WHAM, the Livingston County Sheriff’s Office pulled over Franklin Gay, 41, and allegedly saw him swallowing drugs and beginning to overdose. After he was taken to the hospital, he allegedly walked out of the facility and a brief manhunt ensued.

“This is one of those things, it’s not very common,” said Livington County Sheriff Thomas Dougherty to 13WHAM. “It’s rare, and we’ll review it and see if there is something we could have done better, whether it’s the hospital, whether it’s us, whether it’s security. All learn something from this. Was it something that couldn’t have been prevented? I don’t know.”

Gay will be charged with felony Tampering with Physical Evidence and Escape, among other charges. Deputies recovered what is believed to be marijuana and a crack pipe in Gay’s vehicle.

Dougherty said that a preliminary investigation shows that Gay was strapped down to the bed on a gurney and a nurse unstrapped him. Dougherty added that the number one priority with Franklin Gay in particular was making sure he was going to live, given the amount of drugs in his system.

“If they’re in custody, we keep them handcuffed,” said Dougherty,”but our number one priority in this subject was taking sure he didn’t die. We felt that he had a dangerous drug in his system.”

U.S. Marshals took Gay into custody after they observed him leaving a home they were watching.

Gay may have fled because he has prior felony convictions which could make a potential sentence on these charges more serious if convicted. According to the New York State Department of Corrections and Community Supervision, he spent more than three years at Five Points Correctional Facility for felony Attempted Criminal Possession of a weapon in the Third Degree.

UPDATE: A Geneseo Justice remanded Gay to jail without bail Friday morning after denying his request that the charges be dismissed.