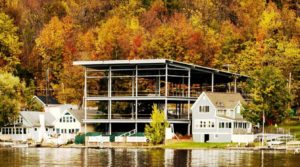 The court also declared that Carl Myers Enterprises has a vested right to develop its originally approved renovation project under the old zoning code.  If the New Project moves forward, the respective boards will have to determine which code, new or old, will apply to the project. All approvals by the boards must be reached by September 26, 2022 (60 days from date of order), or petitioners (neighbors) “can apply to the court for further consideration of remedies including removal of the steel structure and damages to adjacent properties and fines.”

In its most recent decision, the court did not address how the boards would bypass the state zoning law or local law 155.10 which mandates that any non-conforming property (i.e. pre-existing business in a residential zone), that is out of business for more than a year has to revert back to the surrounding zone’s use (in this case, residential), possibly leaving the boards open for additional legal action if any business opened there. (The Conesus Inn, which was a “non-conforming” 80+ year old restaurant in the lakeside residential zone,  closed their walk-in restaurant business nearly ten years ago, in October 2012, and the property was bought by new owner Carl Myers Enterprises the following year. The old building was torn down in 2015 and the neighbors’ lawsuit was not brought until June 2, 2016, as the new building, of a surprising size and shape was going up; therefore, the business had already been closed for more than the allowed time, before the property use reverted to its surrounding residential zone.

Previously the court had ordered the structure torn down because it did not follow the original approval and directions of the Conesus zoning board of appeals and planning board, but that decision to tear the steel structure down was appealed by Carl Myers Enterprises since procedures had not been followed when the boards were reviewing the New Project (building as built).  Originally, the plan that was approved by both the planning and zoning boards in 2014, called for a renovation of the original building which had a capacity of 150 people to be increased to a capacity of about 200, and handicap access and other improvements would be made to the nearly 100 year old building.  The old building was torn down in 2015.

The zoning board had approved renovations to the old building, but when the “new” building appeared very unlike, in size, shape, and placement, what had been approved, the zoning board of appeals was required by courts to take a second look at what was now called the New Project, (building as built). They became concerned about increased vehicle and pedestrian traffic on the East Lake Rd and people crossing the road from the restaurants to the restaurant parking lots across the road, as well as the probability that a building holding three restaurants in 18,600 sq. ft. built to serve 800 (according to court papers) would impede neighbors’ enjoyment of their residential  property, with the restaurant walls less than 30 feet from their residences. (Previous size was 7800 sq. feet, seating 150 capacity) The Conesus Town Zoning Board pf Appeals turned the New Project down in a controversial vote of 3-2.

The 24 page decision noted that “:since there has not been a final determination of the legality of the New Project, considerations of removal of the steel structure/building, damages to the adjacent properties, and penalties are premature. If CME fails to achieve the necessary approvals and lawful permit(s) within 60 days of this order, petitioners may apply to this court for removal of the steel structure/building, damages to adjacent properties and penalties..”

A counter crossclaim made by CME Enterprises to compel the neighbors to post an undertaking in the amount of $6.6 million dollars or, in the alternative, for permission to amend CME’s answer adding a counterclaim for damages, was denied since the injunction was converted to permanent until CME Enterprises gets the necessary approvals on the New Project, which it still does not have.