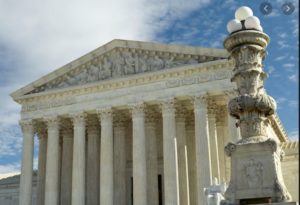 The Supreme Court Strikes Down Tougher Regulations For Abortion in Louisiana.  This signals that the courts, despite opposition from dissenting conservative justices, is reasserting a commitment to abortion rights.

Chief Justice John Roberts, a Republican Bush appointment,  joined with four other justices in sriking down the law requiring doctors who perform abortions have admitting privileges at nearby hospitals.

“The result in this case is controlled by our decision four years ago invalidating a nearly identical Texas law,” Roberts wrote, although he did not join the opinion written by Justice Stephen Breyer.

“Today a majority of the Court perpetuates its ill-founded abortion jurisprudence by enjoining a perfectly legitimate state law and doing so without jurisdiction,” Thomas wrote.

“In an unfortunate ruling today, the Supreme Court devalued both the health of mothers and the lives of unborn children by gutting Louisiana’s policy that required all abortion procedures be performed by individuals with admitting privileges at a nearby hospital.”