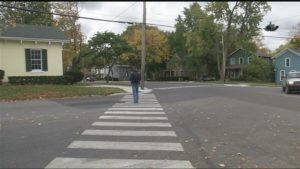 GENESEO – SUNY Geneseo students are petitioning for a stoplight at the intersection of North, Main and Court Streets with Avon-Geneseo Road.

According to our news partners News10NBC, the online petition, available here, began on Oct. 24 and has garnered over 550 signatures.

“The blinking orange light at the corner of Main Street and North/Court Street is simply not sufficient to ensure safe driving and walking for Village residents,” posted Noah Koven, who created the petition. “When driving West on North Street toward the intersection, it is nearly impossible to see oncoming Northbound traffic. I have personally seen many close calls and heard anecdotes from fellow residents.”

At first, there was some confusion as to whether the state or the Village of Geneseo owns the intersection. After the petition’s creator, Noah Koven, emailed the Livingston County Highway Department to clarify jurisdiction, the petition was directed at the Region 4 NYS Department of Transportation.

It is not just students who have concerns. Year-round Village residents commented to the petition agreeing that there is need for additional signaling.

“The intersection is dangerous for pedestrians as they cross a longer-than-usual crosswalk, where vehicles are at times unclear of when to stop and turn,” posted Sarah Bissel, of Geneseo. “I do my best to avoid driving near this intersection.”

Despite safety concerns from students and homeowners, Geneseo Police Chief Eric Osganian told News10NBC that out of nearly 150 accidents last year, only three were at that intersection. Some students and residents still think that the intersection, as currently marked, is a hazard.

“Just because there haven’t been accidents doesn’t mean there can’t be or that something bad couldn’t happen,” said SUNY Geneseo student Joe O’Bryan, who says that he walks through the intersection two or three times a day. “Even just walking is dangerous because, technically, you have the right of way if you’re in the crosswalk but people don’t always stop. It’s definitely a dangerous area for sure.”

Geneseo Mayor Richard Hatheway told News10NBC that the Village had a traffic study done in 2009 to weigh the potential impact of a stoplight, a four-way stop, or a roundabout.

“The light situation is fairly expensive,” said Hatheway. “In terms of that particular intersection, yeah it’s a hassle but again it does not seem to have an unusual number of accidents and there does not seem to be some easy fixes to it.”

O’Bryan said that even though many Village residents simply accept the intersection how it is and learn to be cautious of it, there is still room to change it.

“Just because people think, ‘Oh, it’s the way it’s always been,’ doesn’t mean it’s not up for change.” said O’Bryan.