At some point before Friday morning, the painting depicted a Republican elephant, the letters GOP, a checked box marked ‘Kasich,’ and the group name of the College Republicans. The tree’s defacement has brought about a swarm of conversation online among college students, some in support of the action and others in opposition.

“Just because you disagree with someone’s political beliefs does not mean you can completely destroy something they put effort into,” posted Alaina Maiorano to Facebook. “Also, just because they’re republicans, does not mean they necessarily support Trump. That’s more than likely what this is about, too.”

“Well, that’s what the Republicans have been trying to do for the Democrats for years, this tree being vandalized by them demoncrats is just a small price to pay no?” responded Cheehong Chia.

The Greek Tree, according to the college website, is traditionally painted by Greek organizations and other college-affiliated groups. The tree, meant to represent and raise awareness of organizations, can be painted by anyone ‘so long as they use common sense with regards to safety and regard for College property.’

The long-standing tradition among organizations is to be the last ones to paint the tree before sunrise.

“lmao the whole point of the greek tree is to be the last ones to paint it before the sun comes up,” posted Rachel Leah in a separate comment. “The College Republicans evidently were not the last ones – stop being butthurt when this is a time honored Geneseo tradition!!!!! Also, F*** donald trump.”

“As said below, Geneseo College Republicans did not support Trump,” posted by Eric Meyer in response. “As far as painting over the tree before the sun comes up, yea, with your own organization. Don’t just cover someone else’s hard work up and draw faces because you disagree.” 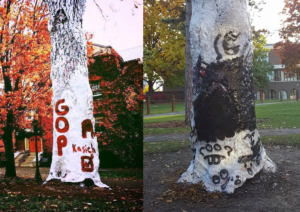 Before to the left, after to the right. (Photos/Sarah Simon; Noah Horan via Facebook)