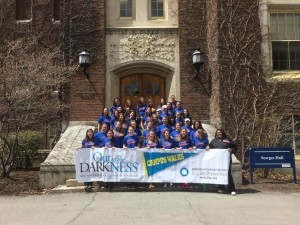 GENESEO — SUNY Geneseo sorority Sisters Making A Change (SMAC) is coordinating their fourth annual ‘Out of the Darkness Walk‘ through the American Foundation for Suicide Prevention (AFSP) as suicide rates in Livingston County remain the highest in the region.

According to New York State Department of Health, Livingston County had a suicide death rate of about 16 per 100,000 people in 2013. Monroe County had less than 8 per 100,000, and Yates County had zero suicides. According to the Livingston County Department of Health, these statistics do not factor incidents that cannot be proven to be suicides, like self-inflicted gunshot wounds with no witness or message by the victim.

“A few years ago, suicide became the issue where we directed our philanthropy,” said Kelly Hustak, co-service chair of SMAC. “It’s a really important cause for younger people. It affects so many people who are college-aged and is the second leading death among people ages 18 to 24. We wanted to commit ourselves to one thing we could really make a difference in.”

All money raised from the fundraiser will go directly to the AFSP. Speaking at the walk will be Sarah Clark, the Western New York Area Director for the AFSP. Clark will give a 10-minute speech and share her story before the event begins.

The sorority expects a turnout of both local community members as well as students. The walk was approved as a SUNY Geneseo Greek Week event, meaning that 20% of all Greek Organizations will be required to attend. That alone gives the event a turnout of 150.

Hustak added that a large factor in preventing suicide is better education regarding mental health.

“Suicide is linked to mental health,” said Hustak. “A lot of suicides are when stressors get to a person who has a mental health issue. Our walk is about raising awareness and stopping the stigma surrounding mental health, and about starting a conversation about mental health. It’s about letting people know that they’re not alone.”

The AFSP has set out on a mission to reduce the annual suicide rate in the U.S. 20 percent by 2025. They emphasize funding research on suicide prevention, creating a culture that is serious about mental health, and bringing hope to those affected by suicide.

Those interested in participating in the event can register or donate to the AFSP here.