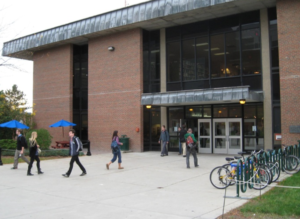 Milne Library, the main library on the SUNY Geneseo campus will be closed at least until 2024, which means incoming freshman next fall likely will graduate before seeing it reopened.

The huge three floor library was completed in 1966, and included computer space, quiet study space, small tutoring rooms, special rare local history collections, curriculum collections, bound and microfiched volumes of local newspapers and magazines, thousands of shelved books, and classrooms. Reserve materials for classes were also housed there, as well as copiers and printers for student use, and a small café.

In the meantime, a much smaller library in Fraser Hall is available, as well as other quiet study places in Sturges Hall, Welles Hall, and other college buildings. What once would have been a major inconvenience can be largely handled through computer access to research materials online, as well as help from other college libraries.  Materials known to be housed in the Milne library can be ordered, and an e-mail sent when the needed item is available. Printer services for students are now available in Bailey and Brody Hall, as well as dining halls, the college union, and other areas.

According to the library website, the major college library renovation makes sense to do now, as the building is already under construction to remove asbestos.  It is hoped that the major renovation will not only make the library more energy efficient, but will also revamp the entire space for modern use.  Money for the renovation has already been approved from the SUNY Construction Fund, and it is thought that if the asbestos removal and major renovations were done together, it would not only cost less, but be less disruptive than if the college removed the asbestos, opened the library, and then closed it again for the planned renovation.