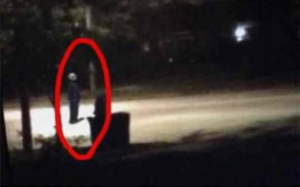 The image, reportedly of a clown behind the basketball courts on the north side of campus. (Photo provided)

GENESEO – SUNY Geneseo says that sightings of people in clown masks, however frightening, present no credible threat to students.

A spokesperson for SUNY Geneseo said that the college continues to monitor reports of sightings.

“No credible threat at this time but we continue to monitor the reports,” said SUNY Geneseo Media Relations Director David Irwin.

The Snapchat snap above, sent from the profile ‘Genesehoe1’ to profile ‘Sam Leonard,’ is supposedly a photo of a person in a clown mask standing around near the basketball courts on the north side of campus.

The snap text says ‘WE LITTY OUT HERE’ and ‘THIS IS NOT A DRILL.’

Another snap, pictured below, allegedly depicts a creepy clown face peeking out of the brush near the south end of campus. The snap text says ‘When there are [expletive] clowns at your school’ and ‘I DISNT [sic] KNOW THIS [expletive] was [expletive] real.’ The snap sender drew a big red arrow pointing to the clown and ‘WTF I’m scared.’

The snap has a SUNY Geneseo Seuss spruce filter, a Snapchat feature designed to indicate that the photo was taken in Geneseo.

Outside of Geneseo, there have been at least two clown sighting reports. At least one has been debunked as a photoshop hoax. The Livingston County Sheriff’s Office arrested the image’s original poster, Christopher Hooper, for misdemeanor Falsely Reporting an Incident.

Students and residents of surrounding towns have reached out to the GeneseeSun.com asking if the rumors of creepy clowns are true. Given recent clown pranks that have caused hype and fear, not everyone thinks that the clown reports, real or not, are funny, especially parents of young children.

Sheriff Thomas Dougherty said that his office doubled patrols in schools on Friday due to numerous reports and calls from concerned parents. Avon Police Chief Gary Benedict said that village officers had an increased presence around Avon Central School events. Both Dougherty and Benedict reported that no credible threat to the public has been found. 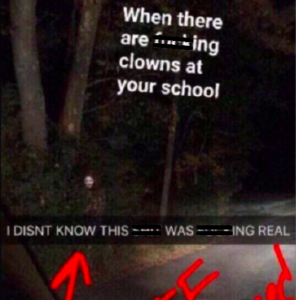 The image reported to be a person dressed as a clown near the south side of campus. (Photo provided) 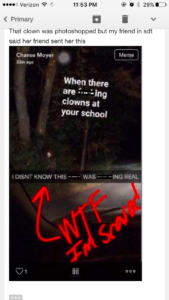 A screenshot of a snap sent to Chanse Moyer. (Photo provided) 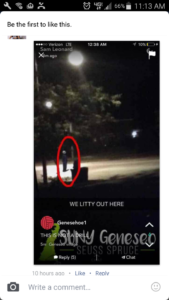