by Covered Wagon Tours, A Division of Niagara Scenic Tours - 2 years ago 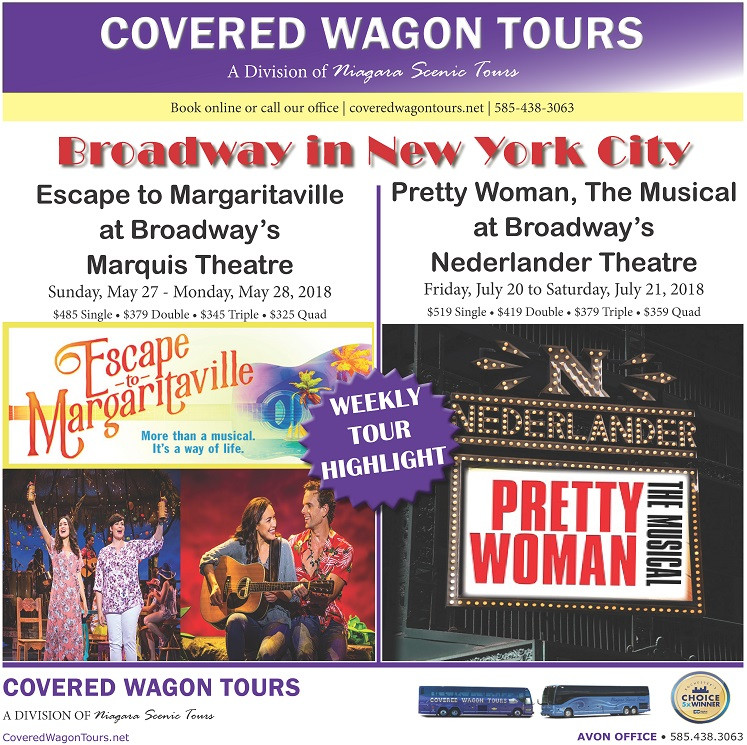 Escape to Margaritaville
Escape to Margaritaville is more than just a musical, it’s a way of life. Discover this new musical comedy about the choices we make and the people we become—once we’ve had a change in latitude. Featuring a rousing score of original songs and Jimmy Buffett’s most beloved classics, including “Come Monday,” “Volcano,” “Cheeseburger in Paradise” and so many more. Escape to Margaritaville invites show goers to take a break from your troubles in a place where the sun is hot, the water’s warm and the drinks are as cold as they are plentiful. Bask in the sunshine and smiles that the island paradise of Margaritaville brings. This refreshingly delightful production was written by Emmy Award winner Greg Garcia (My Name is Earl and Raising Hope) and Emmy Award nominee Mike O’Malley (Survivor’s Remorse and Shameless), choreographed by Tony Award nominee Kelly Divine (Come From Away and Rock of Ages) and directed by Tony Award winner Christopher Ashley (Come From Away and Memphis).

Pretty Woman, The Musical
The new Broadway show based on the smash 1990 film. Two-time Tony winner Jerry Mitchell directs and choreographs the musical featuring a cast led by Tony winner Steve Kazee and film star Samantha Barks. In Pretty Woman: The Musical, Vivian and Edward are unlikely soulmates who overcome all odds to find each other… and themselves. Experience the moments you love from the movie—and get to know these iconic characters in a whole new way—in this dazzlingly theatrical take on a love story for the ages. Brought to life by a powerhouse creative team representing the best of music, Hollywood and Broadway, Pretty Woman: The Musical is guaranteed to lift your spirits and light up your heart. The musical features a score by Bryan Adams and Jim Vallance and a book by the film’s screenwriter J.F. Lawton and late director Garry Marshall.
Click here for more information