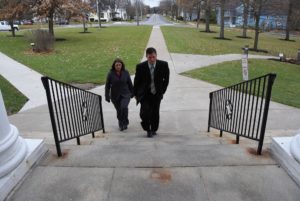 LIVINGSTON COUNTY – Almost exactly on the first anniversary of that fateful night, Danielle Allen appeared in court for a pre-trial hearing to determine what evidence will be admissible at trial.

Allen, now 22, appeared in court with her parents and nine others supporting her. She faces one criminal charge: felony Manslaughter in the Second Degree. Wednesday’s hearing to determine the admission or suppression of trial evidence was the first time that photos and videos from the interior of the apartment was shown publicly.

Allen could be seen crying quietly as District Attorney Greg McCaffrey played videos that Livingston County Sheriff’s Sergeant Chad Van Auken shot when he entered and searched the apartment. The videos show blood smears on many surfaces in multiple rooms, the body of Marcus Postell, 22, and a large kitchen knife.

Several police officers testified as to what they saw and did when they arrived and began investigating on the night of Nov. 21, 2016.

Avon Police Officer Tim Ferrarra testified that he was first to the scene when an urgent radio call from 911 dispatch reported a female being attacked on Fowlerville Road, with the attacker still in the house.

Livingston County Sheriff’s Sergeant Chad Van Auken testified that he shot the videos inside the apartment and oversaw collection of evidence, including 10 to 15 blood swabs and several objects.

Livingston County Sheriff’s Deputy Brendan Flickner was the first deputy to the scene. He testified that he applied pressure to deep cuts on Allen’s hand to control bleeding and asked her questions to determine what had happened.

The hearing is adjourned until Dec. 4 for the defense to thoroughly review the transcript of evidence hearings and decide whether they will call witnesses.

The GeneseeSun.com is withholding specific statements and matters of evidence until trial to preserve the integrity of the jury selection process. 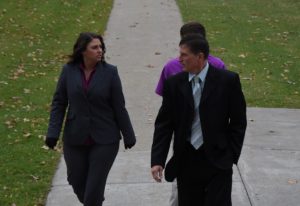 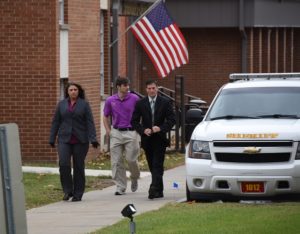