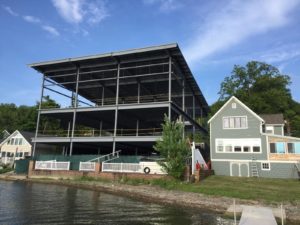 CONESUS – The Conesus Town government is eating itself from within over the Myer’s Inn construction project. Wednesday night, the Town Board considered spending taxpayer money to help Carl Myers Inc. sue the Zoning Board of Appeals (ZBA) for allegedly failing to follow procedure.

As several flabbergasted members of the public pointed out, this essentially means that the Town considered ‘intervening’ or joining in, a lawsuit against itself, and would have to hire an additional attorney to participate, on top of the additional attorney that will definitely be needed to represent the ZBA in the Myers’ suit. Ultimately, after about two hours of bitter exchanges with each other and the public, the Town took no action.

“I’m not interested in going any farther on this, personally. We have so much animosity in our town and so much nasty and so many people that have innuendos about us and I am up to here with it, up to here,” said Donohue, who requested that these ‘nasty comments’ not be published. “I don’t know how many people in here are friendly toward me, but not very many. You guys have told us we’re on the tape, you’ve told us all kinds of things. I can’t take it anymore. I don’t want to do this because these people will run us over and over and over in the court of public opinion, on Facebook, on social media, they’ll go everywhere they can possibly go and it will not end. I’m not doing it. And it’s not because I’m a wimp, it’s because there’s too many nasty people in this community. Too many nasty people.”

Carl Myers Inc. just recently filed their lawsuit, an Article 78 proceeding, which alleges that the ZBA departed from procedure in their meetings. It was the ZBA that on Oct. 30 denied a conditional use permit for the Inn, blocking the project from continuing. Donohue and Deputy Supervisor Tim Beardslee said on Wednesday that on Nov. 27, the ZBA departed from procedure by denying a chance to speak for the Town’s Attorney, Dan Magill, and John Hooker, representing Carl Myers Inc. before closing a public hearing.

Neither Magill nor Hooker were present at Wednesday’s meeting. Magill has recused himself from the discussion of the ZBA suit.

The Board opened Wednesday’s meeting up to public comment. Robert DeLena, who ran against Donahue for Town Supervisor in November, was present as well as Richard Corrigan, who tried to get Republican designation to run for Supervisor in August.

ZBA member Mari DeWit asked why the Town doesn’t just offer further training if there are procedural problems instead of suing their own ZBA on the taxpayer’s dollar. ZBA member Marge DeLena was present but did not speak. ZBA Chairman Patricia Rodman said that the Town joining with Myers’ suit would only solidify public suspicion that the Town is siding with Carl Myers Inc.

“We obviously have a lot of animosity and division in our town over the issue of the Conesus Inn,” said Rodman. “My fear would be the same as what Lois [a member of the public] was implying, that if the Town Board instituted itself with Carl Myer enterprises, no matter how much you told them that you weren’t siding with Carl Myers, I guarantee you they would think that you were.”

As seen at prior meetings, the Town Board itself is profoundly divided on backing Carl Myers Inc. Deputy Supervisor Tim Beardslee was especially vocal, having several tense exchanges with members of the public and Town Councilman Don Wester, who has expressed reservations about the Myers Inn for over a year. The room groaned uncomfortably when Beardslee told local resident Cathy Dickerson ‘You gave the advice to uninvite the attorney from the table, Cathy, I don’t have a lot of respect. It wasn’t very wise.’

“I’ve watched certain behaviors on the board happen for many years, some of them showed back up at this particular hearing,” said Beardslee. “If we have somebody coming in for a shed zoning, any interaction with the Zoning Board, and they don’t follow procedure because of any reason whatsoever, that puts them in harm’s way. That’s absolutely worth my time sitting here with these people. So yes, it’s in the best interests of the town. […] I don’t even feel right saying this, but if you feel strongly that we shouldn’t correct a Zoning Board that’s acting out of procedure at times, I would be surprised. […] My hands are absolutely tied in dealing with that Zoning Board. Right? There’s a few Zoning Board members, one or two or three that really don’t like me. I have tried to give them training, we’ve tried to give them stipends, we removed a Chair that had two meetings in the year subsequent to adopting zoning. Our new Chair is doing excellent, we’ve done a boatload of things to make that Zoning Board operational, yet we saw some things going on that were way out of whack. Not slightly out of whack, way out of whack.”

Town Councilman Don Wester made multiple motions that the issue be opened to a formal public hearing, but no other Board members seconded it. Wester said he was glad that members of the public were allowed to speak at Wednesday’s meeting. He has said on multiple occasions that he is not against the Myers Inn project.

“We still need to have a public hearing to get the entire town notified,” said Wester. “I think it would be a good idea, in my opinion. If no one…well, that’s my motion.”

Town Councilman Dan Mulvaney specifically denied that the discussion on joining Myers’ lawsuit is due to any unhappiness with the ZBA’s decision in blocking the Inn construction from proceeding.

“Even if it [the Myers Inn project] had passed, procedurally I didn’t like what I saw,” said Mulvaney. “I don’t care what Carl Myers would like. I’m not here because of Carl Myers. I’m here for the people and Town of Conesus. […] It’s not about personalities, it’s not about opinions, it’s about did procedure get followed. That’s what an Article 78 is. And that’s not for us to decide. We put our opinion out, the other side puts their opinion out, the ZBA puts their opinion out, and the judge makes the decision. It’s about whether procedure was followed correctly.”

Town Councilman Anita Martucio seemed frustrated that she was not told that Carl Myers Inc. was already suing the ZBA before Wednesday night.

“I always hate to be grumpy about things to the Board in public, but I’m really annoyed that I didn’t know about this Article 78 from Carl Myers before tonight,” said Martucio. “It puts a different slant on the whole thing, and as our public people are saying, when we first started discussing this it was a hope to get out in front of what we suspected Carl Myers would do. But he’s already doing it. […] If we don’t join, it will cost us a lot less.”

The meeting was adjourned with no action taken on the lawsuit.

Donohue said that the question whether to join Myer’s Inc.’s suit could be brought up again by Town Council members at future meetings. 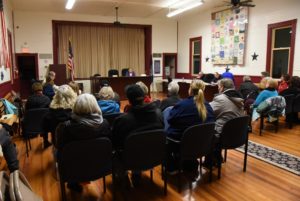 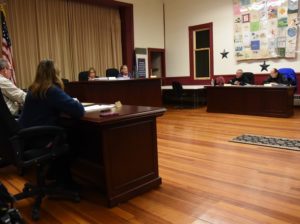 The Town Board. (Photo/Conrad Baker) 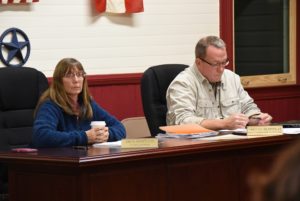 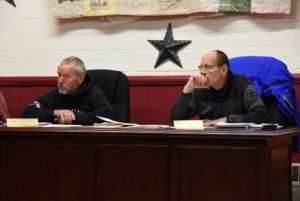 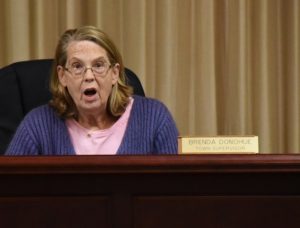