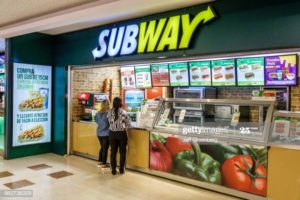 Franchise owners of Subway shops throughout the United States are rebelling over corporate’s decision to bring back the $5 footlong promotion – this time making it $10 for two.

Three quarters (75%) of the franchise owners say they will rebel and not  of those go along with the corporate’s brainchild promotion, according to the North American Association of Subway Franchisees, a group that represents Subway store operators.

“This promotion was started when labor rates were $7.50 an hour as compared to $15 an hour today,” one New York-area franchisee said.

The corporate headquarters has decided to start a national advertising campaign offering consumers the chance to buy any two subs, including the Big Philly Cheesesteak which now sells for $8.95, for just $10.

Ex-Burger King boss John Chidsey, is leading the corporate charge which is, according to their press release, their biggest promtion since the heyday years when they employed Jared Fogle as their spokesman.

To help persuade franchise owners to buy in they are offering them approximately $200 a week if they participate.

Still the individual owners’ incentive they would be operating at a loss.  Thus they appear to be turning their collective stomachs at what they deem and unappetizing promotion.