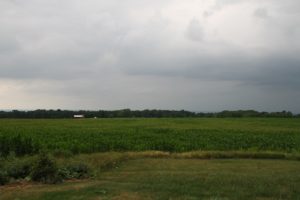 LIVINGSTON COUNTY – Areas of Orleans and Genesee Counties are struggling with heavy rains Monday, but parched Livingston County is not likely to see as much sustained rainfall.

NOAA weather statements say that a strong thunderstorm was located near Oakfield, 10 miles north of Darien Lake State Park, moving east at 50 mph Monday morning. Torrential rainfall and winds in excess of 35 mph are possible with this storm.

Livingston County is in the midst of severe drought conditions. Some areas have seen less than 1/10th of an inch of rainfall in July.

In surrounding counties, the storm may cause localized flooding. NOAA advises drivers in those areas not to drive through flooded roadways.

According to our news partner NEWS10NBC, Monday has a 40 percent chance of precipitation early in the day, followed by sunny, muggy conditions with a high of 89 degrees. Monday night should be clear to partly cloudy with lows of 64.

Wednesday is expected to see isolated thunderstorms but a 0 percent chance of rain. High of 89, low of 68.

Thursday has a 40 percent chance of rain in the morning and should be partly cloudy. High of 84, low of 69.

Friday should be mostly sunny with a 20 percent chance of afternoon showers. High of 82, low of 68.

Saturday should have a mix of sun and clouds and a 30 percent chance of rain. High of 84, low of 67.

Sunday should be partly cloudy with a 20 percent chance of rain. High 82, low 62.