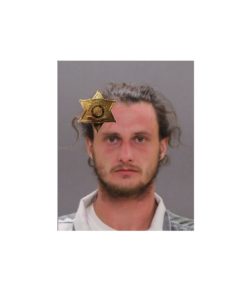 Sheriff Thomas J. Dougherty reports the arrest of two individuals on weapon-related charges following an investigation by the Sheriff’s Office.

On July 22, 2022, at about 8:00 pm Sheriff’s Deputies, responded to an address on McGinty Road, in the Town of Conesus, for the report of stray bullets striking the ground on a neighboring property.

It was discovered during the investigation that Carl J. Engert, age 23 of Lackawanna, and Kevin M. White, age 48 of
Conesus was involved in target shooting which resulted in errant rounds striking an adjacent property and placing
other individuals directly in danger. The investigation also revealed that Engert had a rifle that did not
have a serial number, as well as a Glock pistol that he did not have a permit for.

Engert was arrested and charged with felony Criminal Possession of a weapon in the third degree, as well as felony
Criminal Possession of a Firearm.  White was arrested and charged with Reckless Endangerment in the Second Degree.
Engert and White were transported and turned over to Central Booking Deputies at the Livingston County Jail for
processing. White was issued an appearance ticket to return to court at a later date and released, as the charge did not
qualify for bail under the NYS Justice Reform Act.

The District Attorney’s Office was contacted in regards to bail due to the felony level charges and recommended Engert
be held on $1,000 cash or secured bond in an amount at the discretion of the Court.  Engert was later arraigned at the Livingston County Centralized Arraignment Part (LC-CAP) at the Livingston County Jail before Justice Lessons. The Judge did remand Engert to the custody of the Sheriff, setting bail at $500 cash or $1,000 partially secured bond. Engert later posted bail at $500 cash and was set free.