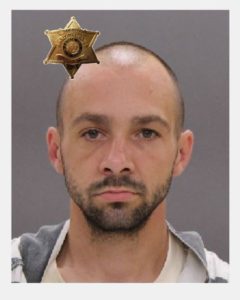 Sheriff Thomas J. Dougherty reports the arrest of a Cayuga County resident on felony charges following an investigation by  the Sheriff’s Office.

On August 23, 2021 at about 9:00am, the Livingston County Emergency Communications Center (E-911) received a call reporting  that a vehicle had just been stolen from an address on South Street, in the Village of Geneseo. The Geneseo Police Department did  respond to the scene for their investigation.

Shortly after the call, Sheriff’s Deputy Molly Flavin was on patrol in the area of Genesee Street and Main Street, in the Town of York,  when she observed a vehicle matching the description of the vehicle that was reported stolen minutes earlier. Deputy Flavin did  confirm that the vehicle observed was the reported stolen vehicle and conducted a traffic stop on Virginia Avenue, quickly taking the  subject into custody without incident.

The suspect was identified as Richard R. Stagles, age 35 of Sterling, NY. Through the investigation, it was also discovered that  Stagles had stolen a large sum of money that had been in the vehicle at the time it was stolen. A records check also revealed that  Stagles’ driving privileges had been suspended in the State of NY.

Stagles was transported and turned over to the Central Booking Deputies at the Livingston County Jail for processing and pre arraignment detention. The District Attorney’s Office was contacted in regards to bail due to the felony level charges. It was  recommended that Stagles be released on his own recognizance, as the charges did not qualify for bail under the NYS Justice Reform  Act.

Assisting on scene with the investigation for the Sheriff’s Office were members of the Patrol Division, Criminal Investigations  Division, Forensic Identification Unit (FIU) and Command Staff. The investigation was handled under the command leadership of  Sergeant Chad Draper.