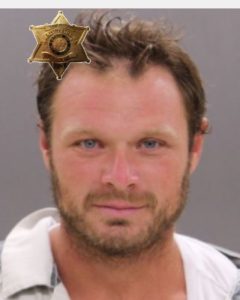 Sheriff Thomas J. Dougherty reports the arrest of a Nebraska resident on a felony charge following an investigation by the Sheriff’s Office.

On July 13, 2021 at about 9:30pm Sheriff’s Deputies responded to the United Methodist Church on Summers Street, in the Village of Livonia, for the report of a suspicious individual that was in the parking lot acting strange.  Deputies arrived and located the subject, identified as Eric B. Warbelton, age 35 of Lincoln, NE. Following the investigation, it was discovered that Warbelton had stolen a vehicle from Lincoln, NE which he was still in possession of.  Warbelton was arrested by Deputy Laszlo Babocsi and charged with felony Criminal Possession of
Stolen Property in the 3rd Degree.

Warbelton was transported and turned over to the Central Booking Deputies at the Livingston County Jail for processing and pre-arraignment detention. The District Attorney’s Office was contacted in regards to bail due to the felony level charges. It was recommended that Warbelton be released on his own recognizance, as the charge did not qualify for bail under the NYS Justice Reform Act.  Warbelton was later arraigned at the Livingston County Centralized Arraignment Part (LC-CAP) at the Livingston County Jail before Town of Mount Morris Justice David Provo. The Judge did release Warbelton on his own recognizance, per the law, with a future court date provided and Deputies did set him free.

Assisting with the investigation for the Sheriff’s Office was Deputy Jason Page.