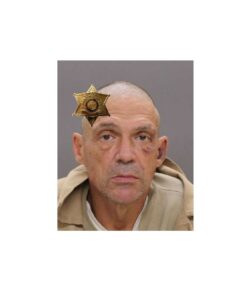 Sheriff Thomas J. Dougherty reports the arrest of a Dansville resident on felony and misdemeanor charges following an investigation by the Sheriff’s Office.

On November 6th, 2022, at about 3:15 am, Sheriff’s Deputies responded to an address on Riverside Drive in the Village of  Geneseo after a homeowner had reported an unknown person had driven away with his UTV.

Members of the University Police at Geneseo were able to locate the suspect operating the stolen UTV on the SUNY  Geneseo campus. The suspect was taken into custody and identified as Neal W. Dehmler, age 57, of Dansville.

The investigation alleges that Dehmler had unlawfully entered a garage at an address on Riverside Drive, where he stole the UTV and two cans of gas. Dehmler was also found to have prescription medication, which he was not prescribed.

Through further investigation, Deputies learned that Dehmler had an active warrant out of the State of Georgia for  Assault, Battery, Making Terroristic Threats, and Obstruction of Police. Chatham County, Georgia, was contacted and advised they would extradite Dehmler.

Dehmler was arrested and charged with felony Grand Larceny in the Fourth Degree, felony Burglary in the Third Degree,  and Criminal Possession of a Controlled Substance in the Seventh Degree.

Dehmler was turned over to Central Booking Deputies at the Livingston County Jail for processing and pre-arraignment detention. The District Attorney’s Office was contacted regarding bail due to the felony-level charges. It was recommended that Dehmler be held without the possibility of bail due to having four previous felony convictions.  Dehmler was also held on an active arrest warrant as a Fugitive from Justice and is awaiting court appearances and extradition back to Georgia.