According to a press release from Livingston County Sheriff Thomas Dougherty, Patrick O’Hara, 21, was arrested for felony Grand Larceny in the Fourth Degree.

On June 11, Livingston County Deputy Sheriffs were called to a residence in the Town of Springwater for the report of a theft of two long guns. Deputies quickly identified O’Hara as a potential suspect.

On June 12, investigating members of the Sheriff’s Office located the suspect and locations where he allegedly sold the two stolen guns. Deputies took O’Hara into custody.

O’Hara was turned over to Central Booking Deputies at the Livingston County Jail for processing and pre-arraignment detention. 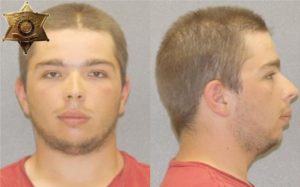