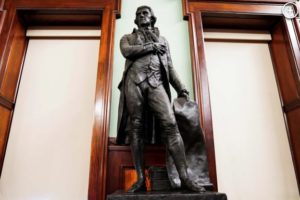 Thomas Jefferson, the writer of the Declaration of Independence has been banished from NYC’s City Hall.

Mr. Jefferson. who put his life on the line for our Independence and as the third President of the U.S. wrote and passed through the law abolishing slave trade, was voted unanimously to exile his once place of honor from City Hall to the New-York Historical Society.

During a virtual meeting Monday, PDC director Keri Butler said a Historical Society trustee had agreed to donate a plaque that would provide historical context to the statue at the museum.

The likeness of the nation’s third president has resided at City Hall for the past 187 years. Its departure was prompted by some City Council members who objected to Jefferson’s as a slave owner.

“Each day it is allowed to linger there serves as a reminder to our members of the horrors perpetrated against Blacks and Indigenous Peoples by revered figures – like Jefferson – who were instrumental in America’s creation, but also known practitioners of slavery that espoused white supremacist belief,” the caucus said in a statement.

“That Jefferson is holding the bill of rights in the very statue is lost on those who have benefitted from his contribution,” Borelli said.

Thus the President who doubled the size of our country during his term of office, established West Point, and wrote Virginia’s statute for religious freedom has been sidelined.