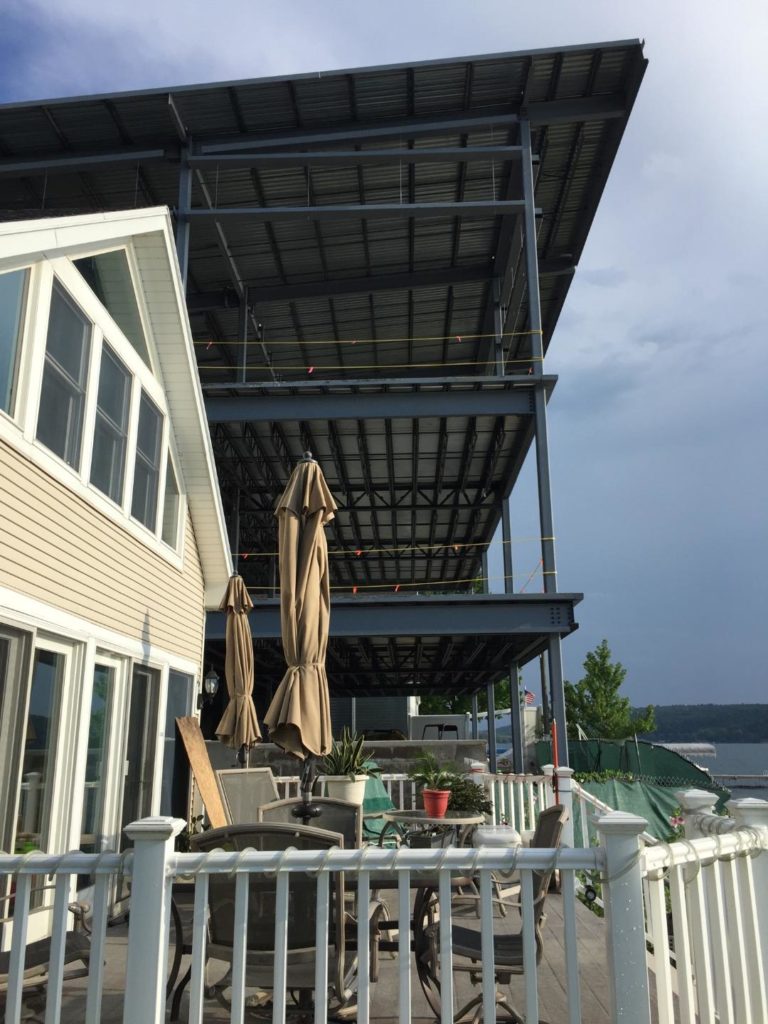 Article Courtesy of the Publisher of the Lake Country Echo, Robert Delena

CONESUS — In a written decision on May 7, 2018, Judge John Ark of the New York State Supreme Court ruled that the Town of Conesus Legacy Law of 2017 was “illegal, null and void, invalid, and unconstitutional.”

The ruling by State Supreme Court Judge John Ark came about as the result of a lawsuit filed by Tom and Trish Bruckel, Robert Siracusa and Sally Hirth last fall as part of an Article 78 proceeding against the ground-up rebuild of the former Conesus Inn. According to Ark’s written decision, the Conesus Legacy Law of 2017 is null and void because it constituted impermissible “spot-zoning,” violated the Town’s Uniformity Act #262, and was enacted without SEQR.

According to the Master Comprehensive Plan and zoning law in place at the time the property was purchased by Carl Myers Enterprises in September 2013, the property was deemed a pre-existing (to zoning), nonconforming (to lakeside residential zone) business, and therefore, as a business, could not expand without a permit approved by the planning and zoning boards in a residentially zone area.  In addition, according to the law which had been in effect for over 30 years, if the same business was discontinued for more than one year, it lost its use in the residential lakeside zone.

Changes were made to the town’s zoning law in 2015, The Conesus Town Board developed and passed a new “Legacy Law” which removed the pre-existing, non-conforming status from certain businesses on the lake,  removing any restrictions on expanding a business in the residential district without zoning board of appeals approval, although the zba had already approved a modest expansion project at the Conesus Inn site in December 2014. The building was demolished in summer 2015 and when the steel frame went up in summer 2016, the building that was actually being built was not the one that had been approved by the ZBA and planning board in 2014. Changes had been made as the building was being constructed. Instead of an increase in size of the requested “15- 20 per cent or so” of 7800 sq. ft , rooflines were changed, decks enclosed, and the interior of the building was enlarged to about 19,284 sq. ft, towering over adjacent cottages, in a style and size that residents felt did not fit the character of the neighborhood or the town’s Comprehensive Plan. The new building was also moved forward from where the original footprint was. This resulted in an Article 78 and injunction being filed by neighbors Tom and Trish Bruckel, Sally Hirth, and Robert Siracusa in June of 2016.

In August 2017, the Conesus Town Board changed the Legacy Law again, despite the protestations of most of the people speaking at the public hearings, as well as disapproval from the Livingston County Planning Board. The 2017 rendition of the Legacy Law inserted the word “similar” so that a Legacy business didn’t have to be the exact same type of business, and it removed the time limit a business could be discontinued from one year to five years or “a reasonable amount of time.” The vote to pass the new 2017 version of the Legacy Law was approved by Supervisor Brenda Donohue, Deputy Supervisor Tim Beardslee, and Councilpersons Anita Martucio and Dan Mulvaney; only Councilman Don Wester voted and spoke against making  changes in the Legacy Law, noting he was “listening to the people” and that the timing of making additional changes to the zoning law affecting the Conesus Inn wasn’t good with a lawsuit in progress,  and stating further zoning changes affecting businesses on the lake should wait until the Conesus Inn Article 78 lawsuit was settled. The new 2017 Legacy Law was passed, effective immediately, in August 2017 in a 4-1 vote by the Conesus Town Board (Wester dissenting); however, the revamped 2017 Legacy Law resulted in additional lawsuits for the town.

With the 2017 version of the Legacy Law now deemed “unconstitutional, illegal, null, and void” by State Supreme Court Judge John Ark, the former Conesus Inn property is no longer eligible for Legacy status, since it has been out of business for almost six years and is arguably a different kind of a restaurant business, more of a convention center-party house seating 600 people in 18,600 sq. ft. rather than the large cottage-style mom & pop sit down Conesus Inn restaurant of 7800 sq. ft., that closed in 2012.

At a May 1 Conesus Town Board meeting, Deputy Supervisor Tim Beardslee commented that the town had chosen not to contest the Legacy Law lawsuit, and therefore the town lost the suit. He added at the May 15 meeting that only the 2017 version of the Legacy Law had been thrown out, but that the Legacy Law would be rewritten as quickly as possible.

Article Courtesy of the Publisher of the Lake Country Echo, Robert Delena