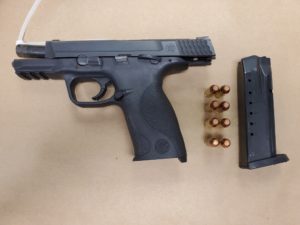 At approximately 3:30 p.m., the State Police attempted to stop a motor vehicle for a traffic infraction on Joseph Avenue in the city of Rochester when the operator attempted to flee.

The vehicle they were driving ran out of gas on Mazda Terrace and the 2 occupants fled on foot.  During the foot chase, the passenger threw a loaded handgun before being taken into custody.  Both occupants ( ages 15) were taken into custody and charged with Criminal Possession of a Weapon 2nd Degree, Unlawful Fleeing, Unauthorized use of a Motor Vehicle, and Criminal Possession of Stolen Property 4th Degree.

They were given appearance tickets returnable to city of Rochester Court.