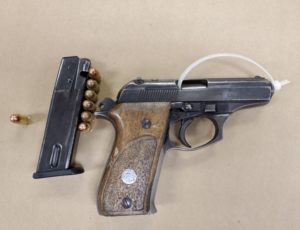 On November 17, 2021, at approximately 1:15 a.m., the State Police GIVE Unit, working in the city of Rochester attempted to stop a motorist for a traffic infraction.  The operator failed to comply when the troopers activated their lights and siren and attempted to flee.  A passenger in the vehicle jumped out and attempted to run from troopers, but was taken into custody by State Police after a brief foot chase.

The operator of the vehicle crashed into an uninvolved vehicle on Cumberland and North Clinton Avenue and also fled on foot and was taken into custody by responding Rochester Police Officers.

2 occupants of the vehicle struck were taken to the hospital for minor injuries.

The passenger identified as Benjamin Boyd, age 26, from Rochester has 2 pending larceny warrants from the Monroe County Sheriff’s Department.

The operator, later identified as Dasean Brown, age 21, from Rochester, has a probation warrant stemming from a prior Robbery 2nd arrest.

Shortly after the pursuit it was discovered that the suspects vehicle was previously stolen at gunpoint (car jacking) in the city of Elmira on November 6th.

The investigation is continuing.