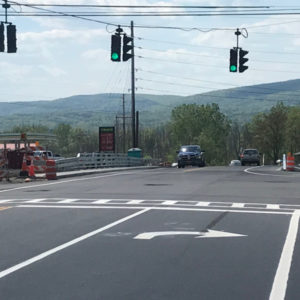 The $2.76 million project included the construction of a new steel multi-girder bridge which can now accommodate wider vehicles, bicyclists and pedestrians using new shoulders and sidewalks along the bridge. Construction included the use of hot-dipped galvanized steel components to mitigate potential corrosion and deterioration of the bridge, effectively providing a longer service life, and requiring less maintenance over time.

“Governor Cuomo and the Department of Transportation are prioritizing rebuilding our roads and bridges across the state with a focus on accessibility and resilience,” said Commissioner Dominguez. “The new bridge along Route 54 in Urbana will now provide access for all users of the transportation system and promote mobility and connectivity year round for the local community and its many visitors during the summer months.”

Steuben County Manager Jack Wheeler said, “On behalf of Steuben County, we are sincerely appreciative of New York State’s investment in the replacement and modernization of the Route 54/Loughline Bridge in Hammondsport. This intersection serves as the gateway to Keuka Lake, and this project provides motorists, cyclists, and pedestrians safe and reliable access to many accommodations and attractions.”

Construction began in November 2020 and work continued throughout the winter months using an alternating single-lane traffic pattern and a temporary traffic signal.

While the new bridge is open to traffic, construction activities will take place during the summer months to remove the temporary detour and signals, perform landscaping work and install new sidewalks along Route 54A. The entire project is expected to complete by the end of August.

Motorists are reminded that fines are doubled for speeding in a work zone. In accordance with the Work Zone Safety Act of 2005, convictions of two or more speeding violations in a work zone could result in the suspension of an individual’s driver’s license.

Today’s announcement complements “Southern Tier Soaring,” the region’s comprehensive blueprint to generate robust economic growth and community development. The State has already invested more than $7.4 billion in the region since 2012 to lay for groundwork for the plan – attracting a talented workforce, growing business and driving innovation. Now, the region is accelerating Southern Tier Soaring with a $500 million State investment through the Upstate Revitalization Initiative, announced by Governor Cuomo in December 2015. The State’s $500 million investment will incentivize private business to invest well over $2.5 billion – and the region’s plan, as submitted, projects up to 10,200 new jobs. More information is available here.