LIVINGSTON COUNTY – In a partnership system that was hatched about a hundred years ago, state agencies are once again offering free pheasant chicks to residents on the ground, to be raised and released into the wild.

A press release from the New York State Department of Environmental Conservation calls the system ‘a partnership among DEC, hunters, 4-H youth groups, and landowners interested in rearing and releasing pheasants.’

The ‘Day-Old Pheasant Chick Program’ is designed to enhance pheasant hunting opportunities statewide. For Livingston County residents, signing up to receive chicks in April, May or June means calling (585) 226-5380 for the DEC Region 8 headquarters, or visiting the headquarters personally at 6274 East Avon-Lima Road in Avon, before March 25.

To maintain the program’s success, a ‘Pheasant Rearing Guide’ and applications are available on DEC’s website here. In 2017, DEC distributed more than 34,500 day-old pheasant chicks to qualified 4-H and sportsmen and sportswomen applicants.

The Day-Old Pheasant Chick Program began in the early 1900s and is funded through the State Conservation Fund, which is supported by license fees paid by hunters, trappers, and anglers.

Pheasant eggs and chicks were distributed to farmers and rural youth in the program’s early days. Today, day-old chicks are available at no cost to participants that are able to provide a brooding facility, a covered outdoor rearing pen, and an adequate release site. Approved applicants will receive the day-old chicks in April, May, or June.

The DEC makes it clear that no chicks obtained through the Day-Old Pheasant Chick Program can be released on private shooting preserves, and all release sites must be approved in advance by DEC and must be open for public pheasant hunting opportunities.

Daily care is necessary to monitor the health of the birds and to ensure there is adequate feed and water for the rapidly growing chicks. The pheasants may be released beginning when they are eight weeks old but no later than Dec. 1. 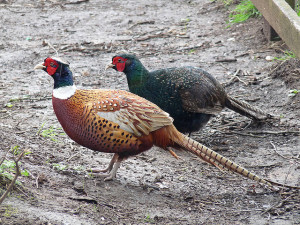