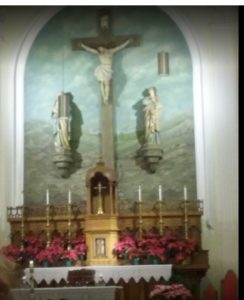 In reality, I could write an entire book on the St. Rose Catholic school in Lima, but I won’t.  What I will attempt to do is to put down some of not only what I remember but some of the best things I can remember.  For one, the school actually covered 9 classes in one small building, kindergarten through 8th grade.  Being a Catholic school, the lessons were taught by the Sisters of St. Joseph. The sisters themselves were wonderful people who were always full of love and understanding.  To me, they did a great job of molding our young minds and giving us a foundation for our future.

I have many great memories of some of the nuns and the things they did and said.  The building was a 2 story brick and mortar building with a serviceable basement.  In the basement, in a separate area, was the old style coal fired furnace, tended to by the school janitor, some storage areas, and a lunch room with tables and chairs where we would eat the lunch we brought to school each day.

On the first floor were grades K though 4.  On the second floor were grades 5 through 8.  Since it was a Catholic school, there was a heavy emphasis placed on teaching religion, but aside from that, we were also taught arithmetic, how to read and how to write, printing at first and then cursive.  I really have no recollection of being taught history or language, but I am sure there was some taught from 6th grade on, as well as English skills such as writing, punctuating skills, and other topics that would prepare us for the leap to high school.

There was a question of the classes being doubled up, and I really had no recollection of that, so I asked my siblings who all said that yes, most of the classes were doubled up in the same classroom.  Grades 1st and 2nd were in the same room.  Grades 3rd and 4th were in the same classroom.  On the second floor, grades 5th and 6th were in the same room also.  Once you got into 7th and 8th grade you were in your own separate classroom on the second floor.  There had to be at least one exception to this, though.  I know from the old class picture that I have, that our class had many more children than what was a “normal” size for the time, so I am sure that by our class size, we were not doubled up with any other class.

Perhaps that is why I had no recollection of us being doubled up in a time when that was the normal thing being done.  Also, on the second floor was a library room at the end of the hall.  At the time, it appeared large, but in reality it was just an average size room with book shelves along the walls, that held a variety of books.  I am sure that most of the books were to do with religion or religious topics.  There was also one more room on the second floor.  It was referred to as the “projection room.” Why it was called that I don’t know because there were never any movies shown in there.  It held a mimeograph machine that was used by the nuns to make copies of tests and other documents we needed in class.  Also it was the place where you were sent to, to meet with the principal if you had been misbehaving.  The principal would come in and dole out punishment if she felt you needed it.  The punishment could range from a stern lecture, to getting your knuckles slapped with a ruler or getting paddled with a ping pong paddle. I am not talking a hard paddling here, just enough to get your attention and hopefully make you not want to come back.  Yes, those things actually happened back then and no one ever complained that little Johnny got punished or that you have no right to touch my kid.  Just think if that were to happen in today’s climate. Oh my!

No, if we deserved it, we got it and that was all there was to it.  There was no ACLU back then filling people’s heads with a warped sense of right and wrong or entitlement.  I do not know of any of my classmates who were punished ever grew up to become rapists or killers because they were “abused” for being bad.  That is just the way it was back in those days; it was not out of the ordinary to be punished for bad or questionable behavior whether it be at home or at school.

I have many fond memories from that school.  I can remember our jackets, and boots or rain coats all hanging in a neat row on little hooks outside the class room in the hallway.  I remember having milk each day in class.  I believe the milk cost 2 cents per carton.  I know that there were kids who were not able to afford the 2 cent price and that the nun’s would pay for the milk for them so that no one was left out or to be made to feel bad.  The milk was brought into class at a certain time each day and we sat at our desks and drank it with the little straws that were furnished.  If you were good and you were lucky you would be the “milk boy or girl” for the week.  You would be the one to go downstairs and get the milk and bring it back and pass it out.

I can remember fire drills, playing on the playground each day when the weather was good, and marching in a straight line over to the church for various reasons or occasions.  All in all, it was a pretty good environment to go to school in.   There was no charge to attend and to this day I do not know how the bills were paid and where the money came from to keep the school in operation.  We were just kids going to school and doing all the things that came naturally to kids in a time when most everything was natural to us.