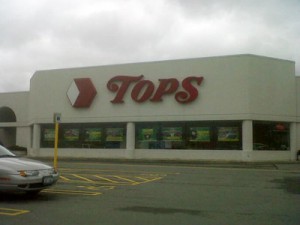 Spencerport resident, Susan D. won a $20,000 shopping spree from TOPS Friendly Markets making her the first of twenty awards the shopping chain intends to give.  Susan opened her winning ticket on the first day of the game. “I saw the ticket, and it said, Wow, you’re a big winner,” Susan said.    According to her,  “it took her a few minutes before it sank in that it was real. ”

Susan has already used one of the gift cards that she was presented with Friday morning when she claimed her prize from the Tops Friendly Markets located at 27 Slayton Avenue, in Spencerport NY.  She has played the monopoly game before, but has never won anything of this magnitude, noting that this is a once in a lifetime kind of prize.

Susan plans to use the gift cards on her future purchases of gas and groceries at the Tops in Spencerport where she received the ticket.  She also plans to gift some of the cards to both her mother and mother in law as well in order to spread the wealth and help them out with their shopping needs.

The remaining 19 grand prizes and other awards will be distributed until the game end this coming May 23rd.

Tops Monopoly Rip It and Win It allows Customers get a new card every time they check-out at a Tops Friendly Marketsusing their Tops BonusPlus® card.  Each purchase transaction will receive one game ticket and customers will also receive a game ticket for each participating vendor product.