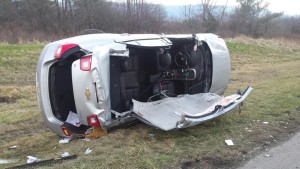 According to Livingston County Sheriff’s Deputy Kevin Barrett, the driver had a suspended license and had been ticketed for speeding an hour earlier by New York State Police in Horseheads. The injured driver told Deputy Barrett said that he fell asleep at the wheel, which caused his car to run off of the road at high speed and roll at about 8:30 a.m.

The rear passengers had to be extricated from the car by firefighters.

All of the occupants were from Brooklyn, NY and in their 20’s. They were headed to R.I.T. in Rochester to drop off the driver’s brother at college.

The driver was issued tickets for Speed not Reasonable and Prudent, Unsafe Lane Change, and Aggravated Unlicensed Operation.