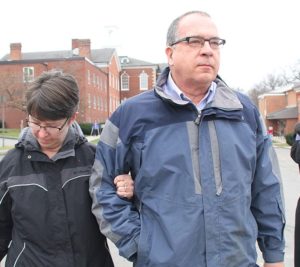 Alan Fox and his wife Cathy walk from the courthouse after the guilty plea in 2014. (Photo/Josh Williams)

LIVINGSTON COUNTY – The ‘pulpit fill’ who pled guilty to felony sex abuse of his own foster daughter in 2014 has completed his prison sentence and been released.

The Livingston County courthouse put on the record that Alan Fox, 62, is now a level 2 sex offender after serving his sentence for felony Attempted Sex Abuse in the First Degree. He waived his court appearance and agreed to accept his sex offender level.

“Its sick. I’m sick that he’s out,” said James, the biological father of the victim.

As a level 2 sex offender, Fox is considered at moderate risk to re-offend. He will be registered with the New York State Sex Offender Registry and required to share his address with the Livingston County Sheriff’s Office, who will also regularly take his photo. This information will be made available on the public directory for the NYS Sex Offender Registry.

Fox was the foster parent of the victim and her brother. Both were removed from the home when the victim reported abuse to a family member within 48 hours of the incident.

After he was indicted in November 2013, Fox ducked and dodged through the courts for a year before finally pleading guilty.

Prosecutors said that the victim cannot even bring herself to talk about the incident in private, one-on-one meetings. The District Attorney’s Office said that this was a main reason for offering Fox a plea deal rather than having a trial and making the victim testify.

He turned himself in to the Livingston County Jail early to get a jump start on his incarceration time.

As a Methodist pastor, as well as a songwriter and vocalist for the Christian folk group Band of Brothers, which was reviewed by christianmusic.com, he clearly has strong ties to community in the southern part of Livingston County.

“I have discovered as I have matured, that if my general path is healthy, whatever musical direction I go to is fine to follow,” said Fox to christianmusic.com. “I believe if you are in God’s Will, nothing is wrong.”