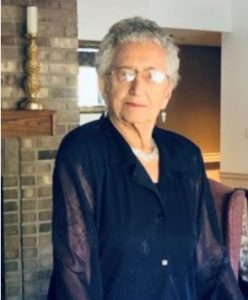 At age 93, Edna passed peacefully on August 29, 2021.  She was born on September 30, 1927 in Chicago, IL to the late Carl and Marie (Fauth) Brehm.  In addition to her parents, she was predeceased by her husband Norbert Kurtz, son Robert “Bobby” Kurtz, and daughter-in-law Linda Kurtz.  Survived by children; David J. Kurtz Sr. (Regina Collins) and Diana (Jim) Ellison; daughter-in-law, Harriet Kurtz; 9 grandchildren; 22 great-grandchildren, with one more due in September; siblings, Rose Marie Perkins and Carl (Judy) Brehm; and many nieces and nephews, and friends.

Edna was payroll supervisor at Champion Products in Livonia and Geneseo for many years. Upon retirement, she enjoyed 3 years in Florida with husband, Norbert, until he passed.  She then lived independently until almost 5 years ago, when she moved back north to live at Pinehurst in Honeoye Falls, where she made many friends.

She was a very strong, caring mother with a dedicated faith in our Lord. She enjoyed her church family in Florida, gardening, puzzling, and crocheting. She found a great deal of enjoyment in her grandchildren and great grandchildren and in her aides at Pinehurst. She will be greatly missed by many!

Family and friends may call on Tuesday, September 7th, from 3-4pm at the Kevin W. Dougherty Funeral Home Inc., 21 Big Tree Street, Rte. 15 & 20A, Livonia, NY where Edna’s Memorial Service will be held at 4pm, following calling hours.  Family will gather for burial to follow at Union Cemetery, Livonia.  In lieu of flowers memorial contributions may be made to Pinehurst, 1000 Pine Trail, Honeoye Falls, New York, 14472 or the First Presbyterian Church of Livonia, P.O. Box 105, Livonia, N.Y. 14487.  To send a condolence or share a memory please visit:  www.doughertyfuneralhomes.com