CONESUS – A social media post is looking for help in identifying a possible fish thief who may be a person or a wild animal.

“I have to report a couple of thefts today. A few days ago my grandson and his buddy caught three large bullheads and we stored them in the metal fish creel pictured with the intent of having them for breakfast the next day. The next morning, we went out to get them they were gone and there was no trace of them. There was a small sunfish also in the creel that was not touched. This happened once before with a bullhead in the same creel and I am wondering if anyone has an idea regarding the identity of the perpetrator. Please advise! Thanks.”

Commenters had several theories and suggestions. The prevailing theory so far seems to be that the perpetrator is an animal and not a person.

“My hubby said it was possibly a raccoon stealing them. He’s had coon get into his basket like yours and take them. They are smart little buggers,” posted Becky Nemitz-Steele.

Of course, the ‘fisher’ or ‘fisher cat’ came up in the comment thread within two hours. This elusive wilderness animals commands the attention of many outdoor enthusiasts, especially hunters, trappers and anglers, who either hope or dread that the capable predator is on the rise locally.

Two commenters suggested putting up a trail cam to catch whoever it is in the act. 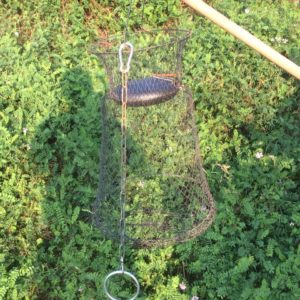