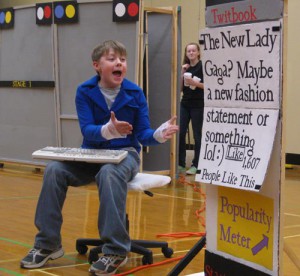 PERRY — On Saturday Odyssey of the Mind will take student’s months of hard work and creativity to the stage as they participate in the region 15 competition with the hopes of competing in the State competition and ultimately worlds.

“Odyssey of the mind teaches students how to solve problems, work together as a team and at the same time opens their mind and show them what they are capable of,” Laurie Copeland, Enrichment Specialist, “It’s an amazing program, I  love seeing what the kids come up and the result of all their hard work.”

Students from Attica, Caledonia-Mumford, Geneseo, Keshequa, Livonia, Mount Morris, Perry and York will al have at least 1 team competing in a problem.

The event is open to the public and will start at 8 a.m. and will run through the day.

Problem 1: Triathlon Travels
Divisions I, II, III & IV
On your mark…get set…go! In this problem, teams will ride on and drive original vehicles in an Odyssey-style triathlon. They will try to score in “curling,” hit the right targets when “jousting,” and “run track” by navigating a course in two directions. Between these events, the team will entertain the audience and the vehicle will change appearance. All of the action will take place in a team-created performance that features the vehicles’ triathlon travels, a commentator, and a coach.

Problem 2: Emoji, Speak for Yourself

Divisions I, II, & III
Three-dimensional emojis will be used to communicate the life story of a once famous, but now forgotten, emoji. Teams will create a performance where the emojis demonstrate special functions like growing, turning into a team member, and changing into a different emoji. Performances will also include a choreographed dance, a technical representation of texting, and sounds to enhance the performance. The twist? No spoken language is allowed.

Problem 3: Classics… Mockumentary! Seriously?
Divisions I, II, III & IV
There are often two sides to the same story. In this problem, characters don’t always agree as they recount the classic story where they appeared. The team will select a classic from a list and present different characters in a humorous documentary-style performance where details are added, denied, exaggerated, and disputed. There will be interviews, behind-the-scenes “clips,” and voice-overs that take the audience through the story and help present the events as they “really” took place. Whose side will you be on?

Problem 4: Animal House
Divisions I, II, III & IV
Over the years, Odyssey of the Mind teams have designed structures that changed into many unbelievable shapes and sizes that balanced and held as much weight as possible. This year, teams will turn their balsa wood structures into animals! Since animals need to eat, they must be fed. The structure will have its appearance transformed and explained during an original performance. During the performance, the structure must hold the team-created food while it supports weights.

Problem 5: A Stellar Hangout
Divisions I, II, III & IV
In the outreaches of the universe, there is an Intergalactic Hangout where all sorts of creatures from different worlds stop, eat, refuel, and relax. Teams will create a humorous performance centered on this science fiction hangout that includes original creatures, foods, and a search for space treasure. There will also be a worker character, entertainment, and a futuristic map at the hangout.

Creativity heats up as teams create their own cooking show where a chef gives an original cooking lesson to a special guest. The show takes place from a creative kitchen where balsa wood is used to support a cookbook, a bowl, and an object of the team’s choosing. A special guest will visit and learn to cook from the chef by using team-created representations of food. Performances will also include a name for the show, theme music, and a story about the meal they are cooking.