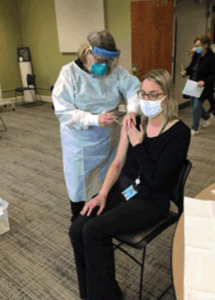 Some speculate Governor Cuomo “Ironclad will” turned to mud yesterday when he switch his decision and is now permitting a greater number of people to get the shot.  The growing list now includes police, teachers and those over age 74 to obtain the vaccine.

After a multitude of refusing to allowaccess to the vaccine, the Governor relented yesterday and widen the number of people the initial shots would be allowed to.  Cuomo said the 3.2 million newly targeted will include pharmacies, doctors’ networks and county health departments, teachers, first responders police and other key public safety workers.

“On Monday, you can start to schedule appointments. Pharmacies will start coming online, some on Monday, more on Wednesday,” said Cuomo.

Still he held firm to his former belief stating, “Caution, caution, caution, because the supply is a major problem, You’ll wind up having 3,000 distribution points in a couple of weeks, but none of them will have nearly enough vaccine.”

.Under the rules, the second-highest priority category (Group 1B), are now able to get their first dose of the two-shot inoculations

Alongside the expansion in eligibility, Cuomo also announced new plans to dramatically expand the availability of the coronavirus vaccine by allowing urgent care, community health clinics and pharmacies to dispense it.

Lastly Cuomo reiterated his warning that if the COVID-19 continues to spread wudely then regions of New York could again face economic shutdowns.