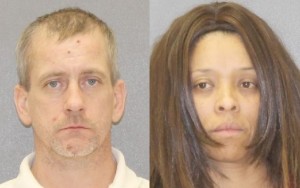 AVON – The Livingston County Sheriff’s Office arrested a couple on Thursday from Cameron Mills, NY for allegedly driving under the influence of drugs with their 8-year-old daughter in the car and possessing crystal methamphetamine.

On April 14, 2016 at about 9:35 p.m. Deputy Sheriff Brandan Flickner of the Sheriff’s Office STOP DWI Unit stopped a car registered out of Georgia for an alleged traffic infraction on East Avon Lima Road in the Town of Avon.

The female operator of the vehicle was identified as Natasha Bouton. The Deputy believed that Bouton could be operating a vehicle in an impaired condition. Bouton performed roadside field sobriety tests. At the conclusion of the roadside investigation, Bouton was placed under arrest for Driving While Ability Impaired by Drugs.

Deputies searched the vehicle and allegedly found a plastic bag containing what is believed to be crystal methamphetamine. Bouton’s husband, Troy Bouton, was then arrested.

Both suspects were transported back to the Livingston County Sheriff’s Office, where Sergeant Joseph Breu, a Drug Recognition Expert, completed a drug evaluation on Natasha. The drug evaluation concluded that Bouton was under the influence of a Central Nervous System Stimulant, a Narcotic Analgesic and Cannabis and was unable to operate a vehicle safely.

Handling the arrests and investigation were Deputy Brandan Flickner and Deputy Matthew Thomas both of the Sheriff’s STOP DWI Unit, assisted by Sergeant Joseph Breu.