As part of the ‘Member Monday’ campaign, a press release from Livingston County Sheriff Thomas Dougherty shared the following on Deputy Galvin, which continues today:

Deputy Galvin has always wanted a career in Law Enforcement. Deputy Galvin’s desire started when he was a young child and continued throughout his education at York Central School. He went on to college and studied Exercise Science and graduated from SUNY Brockport College, as well as, played four years of football. He is the son of David and Barb Galvin.

Deputy Galvin is a member of the Corrections Emergency Response Team (C.E.R.T). Being a member of this specialty team gives Deputy Galvin additional training. The C.E.R.T. Team responds to incidents, riots, cell extractions, mass searches, or disturbances possibly involving uncooperative or violent inmates. We thank Deputy Galvin for his commitment to this large endeavor.

Deputy Galvin is also a Field Training Officer (FTO). Allowing Deputy Galvin to pass on his unique skills to newly hired Deputies assigned to the Jail Division. Deputy Galvin is a Taser Operator, trained in CPR, First Aid and AED, Firearms Certified and also partakes in many other training programs.

Deputy Galvin is also trained to work in the Livingston County Courthouse, providing a safe atmosphere to all that enter. Deputy Galvin is trained to escort inmates to trials, Federal Court and local courts. He is often used in this regard for high risk transports due to his C.E.R.T. training.
Recently, Deputy Galvin attended investigators school giving him the training and knowledge to investigate and document criminal activity in the jail.

With safety and security the first priority, Deputy Galvin has a good understanding of the inmates he comes into contact with.

Deputy Galvin is health conscious and often times can be found training at the LCSO gym or a public gym. 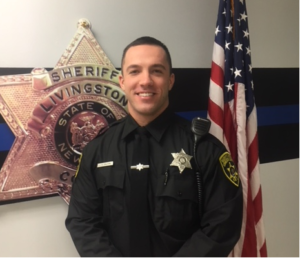