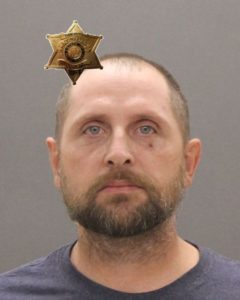 On September 28, 2020 at approximately 9:00 am Deputy Becky Kane, who was assigned as the School Resource Deputy (SRD) at the York Central School District, was approached by a concerned citizen reporting a suspicious condition at a nearby business on Main Street. The Deputy was advised that a male was inside a vehicle in the parking lot of the business and appeared to be acting in a suspicious manner.

Deputy Kane responded to the location and found the vehicle in question occupied by 42 year old Michael J. Beck Jr. of Perry NY. The Deputy Sheriff suspected that there was drug activity in the vehicle and began a drug investigation. The roadside investigation revealed that Beck was attempting to inject himself with fentanyl just prior to the arrival of the Deputy Sheriff.

Beck was found to be in possession of several hypodermic instruments and suspected fentanyl. The suspected drugs were collected and sent to a forensic lab for testing. Beck was released pending the lab results to conform with New York State Discovery Reform standards.

On December 31, 2020 Deputy Kane arrested and charged Beck with Criminal Possession of a Controlled Substance in the Seventh Degree and Criminally Possessing a Hypodermic Instrument after lab results revealed that the suspected drugs tested positive for fentanyl and tramadol.

Beck was turned over to Central Booking Deputies at the Livingston County Jail for processing and issued appearance tickets for the charges as the offenses did not qualify for pre-arraignment detention under the NYS Justice Reform Act, and Deputies did set him free. Beck was provided a future court date in the Town of York Court.