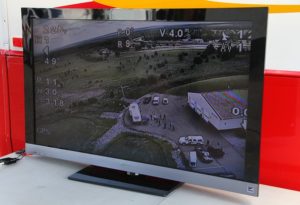 Video of the press looking up from the parking lot. (Photo/Conrad Baker)

LIVINGSTON COUNTY – The Livingston County Sheriff’s Office’s Unmanned Aerial Vehicle (UAV) program is cleared for liftoff as one of the first of its kind in New York State.

At a press demonstration Tuesday afternoon, Undersheriff Matthew Bean was joined by Sheriff Dougherty and Sheriff’s Office administration to show off the two new Unmanned Aerial Vehicles (UAV’s) and what they can do. They buzzed, they swooped, they beat steady breezes to send steady live video to the ground, but they also demonstrated how much information they can get to police in a serious safety crisis.

“This drone has infared capabilities, so if someone is hiding in the bush, if there is an active shooter, a search and rescue, someone barricaded in, or someone runs from us, we will be able to find them more easily,” said Bean, holding the first drone, a DJIF 450. “Suppose an ice fisherman falls through the ice. The system can go out over the water in search for the person within 20 minutes, and without jeopardizing Deputies. We’ll jeopardize the system.”

The second system, a DJIF Phantom 3, is smaller and will be used more for surveying crime scenes than emergencies.

“It can shoot 2.5 gigabytes of live video and take 12 megapixel still pictures,” said Bean. “It can take off and land without anyone at the controls. It is great to have at a crime scene and can save video as evidence. For crowd control, it can go up and look over people to see where they are and where there are crowd flow issues. We just won’t fly directly over people.”

Both Bean and Dougherty made it clear that the drones will not be used for surveillance of individuals. Both said that a warrant would be needed before using the UAV’s for evidence collection.

“What it comes down to is public trust,” said Dougherty. “I know for a fact that there are residents out there who think we are going to be spying in their windows. […] We will schedule a demonstration like this one for the public to let people know exactly what these will be used for and what they will not be used for.”

The DJIF 450 came courtesy of a $7,500 equipment grant from Senator Patrick Gallivan. The DJIF Phantom was purchased using $1,000 of the Sheriff’s Office’s budgeted funds.

The Sheriff’s Office has been working closely with the Federal Aviation Administration (FAA) for the past year to gain a Certificate of Authorization (COA) to fly drones within Livingston County. Among other things, they must fly under 400 feet and must notify local airports, meaning Geneseo or Dansville, if they intend to fly within 2 miles of the airstrip.

The hurdles for a law enforcement agency to gain a COA is more complicated than a private citizen or corporation.

Dougherty said that he is confident that UAV’s will continue to take off as a national trend.

“You can’t get a helicopter that low without some risk,” said Dougherty. “I firmly believe that we are going to see more UAV’s, and not just in law enforcement. I pushed and pushed and pushed for this, and I am lucky to have an Undersheriff who works as diligently as Matt Bean does. He has 16 months into this project and did a remarkable job implementing this unprecedented program.” 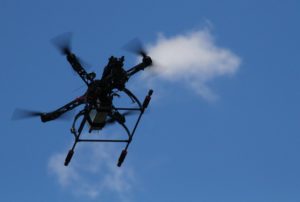 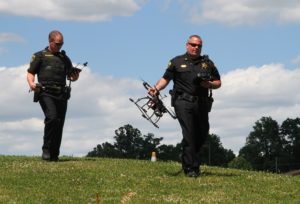 Chief Deputy Jason Yasso carries the DJIF 450 back from the field. (Photo/Conrad Baker) 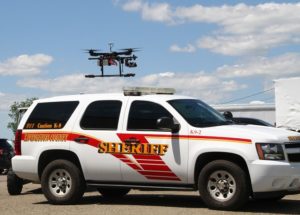 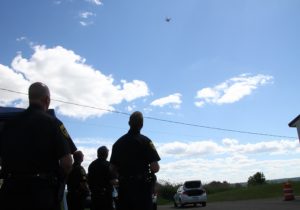 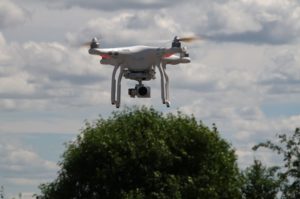 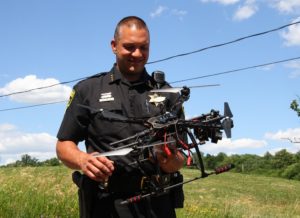