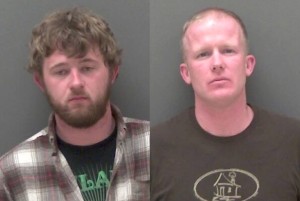 According to a press release from Livingston County Sheriff Thomas Dougherty, Mark Cornelius, 31, and Thomas Ryan III, 23, were arrested for felony Driving While Intoxicated and other charges.

On Friday, March 25, 2016 at approximately 8:57 p.m., Sheriff’s Deputy Connor Sanford of the Livingston County Sheriff’s STOP-DWI Unit allegedly saw a motorist fail to stop at the stop sign while traveling south on York Steet. The motorist was stopped and identified as Cornelius, of Lima. A roadside DWI investigation was conducted which resulted in the arrest of Cornelius for Driving While Intoxicated.

Cornelius was transported to the Livingston County Sheriff’s Office where he did submit a to chemical breath test that was administered by Deputy Brandan Flickner also of the Livingston County Sheriff’s Office STOP-DWI Unit. Cornelius was charged with Driving While Intoxicated as a Felony due to a past conviction within the past ten years. He was also charged with Driving While Intoxicated per se for allegedly driving with a BAC of .08% or greater, Failure to Stop at Stop Sign, Consumption of an Alcoholic Beverage While Operating a Motor Vehicle, and Criminal Possession of a Hypodermic Instrument.

Cornelius was processed and later turned over to members of the Livingston County Jail to await arraignment. Cornelius was arraigned the following day in Lima Town Court before Judge Luhowy and held on $1,000 cash bail or $2,000 bond.

On Sunday, March 27, Sheriff’s Deputies Caleb Cutting and Michael Donals conducted a traffic stop on Warner Road in Springwater for traffic infractions. Upon speaking with the operator, who identified himself as Ryan, of Lima, it was suspected that he may be in an intoxicated state. Deputies administered Standardized Field Sobriety Tests to Ryan and ultimately arrested him for DWI.

Upon further investigation, it was found that Ryan did have a previous DWI arrest and conviction in 2015 which did make this arrest a felony. Ryan was transported to the Sheriff’s Office where he submitted to a chemical breath test.

Ryan was turned over to staff at the Livingston County Jail where he was held awaiting arraignment. Ryan was arraigned in Sparta Town Court before Judge Scollon and held on $500 cash or $1,000 bond.