According to a press release from Sheriff Thomas Dougherty, 13 from Livingston County residents attended the NYSSI’s summer camp from July 9 to July 15.

“The campers get an insider’s look at the world of law enforcement,” said Sheriff Dougherty. “By working with and learning from the Sheriffs and Deputy Sheriffs at the camp, the kids develop a deeper respect for and understanding of the men and women who enforce our laws and serve our local communities. I personally thank all the folks who donate to the camp because they make it possible for our local campers to attend.”

Campers attended Camp Iroquois, located on Keuka Lake in the Finger Lakes Region of Yates County, for a week of ‘wholesome summer fun.’ Sheriff’s Investigator Gene Chichester traveled with the campers to serve as their counselor for the week.

Now in its 41st year of operation, the camp will accommodate over 900 boys and girls between the ages of 9 and 12 from across New York State this summer. The campers attend at no charge.

Made possible by the generous financial support of the Honorary Members of the Sheriffs’ Institute, the Sheriffs’ Summer Camp provides a solid recreational program while stressing basic values and good citizenship.

The Sheriffs’ Summer Camp is a program of the New York State Sheriffs’ Institute, Inc. The Sheriffs’ Institute was established in 1979 with the mission to assist the Office of the Sheriff in advancing education in the criminal justice community, preventing juvenile delinquency, and supporting victims of crime and their families. 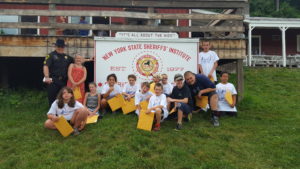