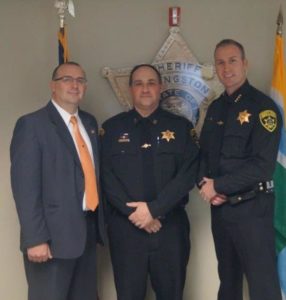 LIVINGSTON COUNTY – The Livingston County Sheriff’s Office promoted a hardworking member of their Emergency Communications Division into a newly-created supervisor position on Monday.

According to a social media announcement by the Sheriff’s Office, Dispatcher Brian Wood is now one of five senior dispatchers, positions that were created earlier in 2016 to add an extra layer of supervision under the Communications Director (currently William Mann), who must sometimes leave the office.

“In his new position of Senior Dispatcher, Brian will be a first line supervisor in the ECC,” posted the Sheriff’s Office with their congratulations. “He will lead a team of up to four dispatchers on a shift.”

Members from each of the Sheriff’s Office’s five divisions and Wood’s family attended a special promotion ceremony in the Road Patrol briefing room. Wood’s wife, Deputy Kerry Ann Wood of the Sheriff’s Jail Division, pinned his new Senior Dispatcher badge on his uniform.

In March 2016, Sheriff Thomas Dougherty and County Administrator Ian Coyle estimated that the change will cost approximately $20,000 in increased wages.

The change is one of many steps that the Sheriff’s Office and local first reponder agencies are taking to prepare for the $4.6 million upgrade to their radio and phone systems.