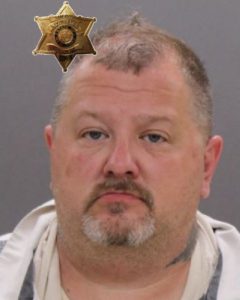 On May 22, 2021 at approximately 10:29 pm, Sheriff’s Deputies responded to an address on West Henrietta Road in the Town of Avon for the report of a male and female fighting at the location.
The investigation alleges that 50 year old Todd E. Merzke of Hilton, NY, got into a physical altercation with a female at the location at which time he punched the female in the head and stole her cell phone while she was attempting to call 911. It is further alleged that Merzke had a current court issued order of protection in place requiring him to stay away from the female.
Merzke fled the scene after the altercation and was located by Sheriff’s Deputies in the early morning hours of May 23 at his residence in Hilton. Merzke was taken into custody by Livingston County Sheriff’s Deputies with assistance from the Monroe County Sheriff’s Office.

Merzke was arrested and charged with felony Robbery in the Third Degree, felony Criminal Contempt in the First Degree, Criminal Mischief in the Fourth Degree, Petit Larceny and Harassment in the Second Degree.  Merzke was turned over to Central Booking Deputies at the Livingston County Jail for processing and prearraignment detention as the offenses did qualify for pre-arraignment detention under the NYS Justice Reform Act. The District Attorney’s Office was contacted in regards to bail due to the felony level charges. It was advised that Merzke should be remanded on $10,000 cash or $20,000 bond.

The investigation was conducted by members of the Sheriff’s Office Criminal Investigations Division, Patrol Division and Forensic Identification Unit.