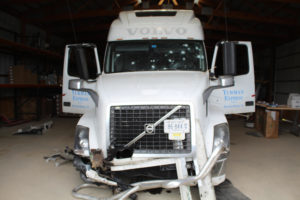 Livingston County Sheriff Tom Dougherty in a press conference today updated the community on the investigation of Joshua Blessed of Harrisonburg Virginia , who led police on a multi county, high speed chase  which ended in a fatal shootout on May 28th,2020.
Dougherty gave an in depth timeline of events that transpired that started with a routine traffic stop in LeRoy where the truck driver refused to cooperate with the LeRoy Police, Blessed then led police through Batavia, back to Leroy then into Geneseo where Blessed fired the first shot at officers  across from Quicklees on 20A in Geneseo. Blessed sped down 20A then to Interstate 390 where more shots were fired, Blessed then maneuvered a U-turn on the interstate and fired more shots before heading back to 20A and west back to Geneseo where the chase ended in the very spot where the first shots were fired. Officers then stuck Blessed with four rounds, three to his hip and a fatal shot to the head.
Upon investigation a LCSO investigator unmarked car was struck nine times in front of Quicklees, a second shot was fired at Country Club Rd where a second marked car was hit. The third set of shots was fired at 9:31 PM on Exit 8 where two rounds struck a Genesee County Sheriff’s car and two rounds struck a LeRoy Police car, both cars were marked.
Blessed was in possession of a 9mm Glock which upon investigation recovered 24 rounds fired. Inside the vehicle investigators found 17 round magazines with 6 left in the gun.
Dougherty also answered the question of how many shots were fired by law enforcement, totaling 129 rounds fired by law enforcement. Out of 129 rounds, 91 rounds hit the tractor trailer. with seven officers shooting rounds along different points. The first round of shots fired by law enforcement officers was on the northbound Exit 8 off ramp where 61 rounds were fired. At the end of the ramp at the 20A intersect, 17 rounds were fired. The third round of shots were fired by the southbound on ramp heading west on 20A. The fourth and final rounds were fired at the Morgan View Drive and 20A intersection where 48 rounds.
All shots that are accounted for are based on evidence found at multiple scenes.
In addition, local law enforcement and FBI local to where Blessed resided were also contacted. FBI conducted search warrants on Blessed’s private vehicle which agents recovered three IED pipe bombs, one AK-47, a Glock 9mm and $18,000 in cash. Agents also searched the residence where Blessed had rented a room for 3 years. Through that search warrant his found 11 IEDs, another AK-47 this one in particular was equipped with a thermal scope, a 50 Cal rifle, a .338 caliber sniper rifle and approximately $130,000 in cash along with several manuals on  how to build IEDs and how to avoid law enforcement detection.
Dougherty said the investigation is not closed, it is close to being closed on the end of LCSO and they are  still working on leads and loose ends. “I truly believe that day that Blessed did not plan for a major attack on law enforcement again. That doesn’t mean that I don’t think he had a plan in the future based on what was recovered and his vehicle and based on what was recovered in this bedroom. I do believe that he certainly had a plan for the future. What that plan was, I don’t have that information.” said Dougherty.