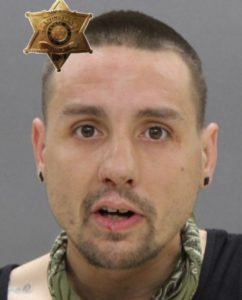 Sheriff Thomas J. Dougherty reports the arrest of a Monroe County resident on felony drug related charges following a call for service regarding a welfare check.

On April 10, 2021 at about 8:40pm Deputy Cheyenne Masiello was assigned to the Sheriff’s Office STOP DWI Unit when she responded to a business on Lakeville Road (State Route 15) in Avon for a call for service regarding the welfare check of an individual at that location.  The Deputy Sheriff arrived and made contact with the individual, identified as Andrew E. Sullivan age
37, from Rochester NY. During the encounter, the Deputy Sheriff did suspect Sullivan to be involved in drug activity which prompted a drug investigation.  The investigation revealed that Sullivan was in possession of approximately 2.7 (two point seven) grams of suspected cocaine, which a later test confirmed to be positive. Sullivan was also found to be in possession of a hypodermic instrument.

The investigation also revealed that Sullivan had operated a motor vehicle to the business. A records check revealed that Sullivan’s NYS Drivers License was suspended. Sullivan was arrested and charged with felony Criminal Possession of a Controlled Substance in the Fifth Degree, Criminally Possessing a Hypodermic Instrument, and Aggravated Unlicensed Operation
in the Third Degree.

Sullivan was transported and turned over to Central Booking Deputies at the Livingston County Jail for processing and released on an appearance ticket to return to the Avon Town Court at a later date, as the offenses did not qualify for arraignment under the NYS Justice Reform Act. Assisting with the investigation on scene for the Sheriff’s Office was Deputy Gordon Truax of the
Patrol Division.