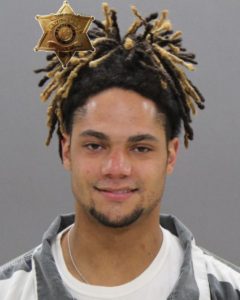 On January 26, 2021 arrested and charged Hathaway with two (2) counts of felony Grand Larceny in the 4th Degree, Identity Theft in the 3rd Degree and Petit Larceny following an investigation into the theft of a wallet and credit cards. As a result of that investigation, a vehicle belonging to Hathaway was secured as evidence by the Sheriff’s Office.

Hathaway was released on the felony charges for that incident and it is alleged that on February 4, 2021 he entered the fenced area of an impound yard in the Town of Geneseo and gained access to
the vehicle while it was being held as evidence. The Sheriff’s Office investigation was completed, and Deputies were attempting to locate Hathaway when he was involved in another incident.
On April 4, 2021 at approximately 01:10 am, Sheriff’s Deputies were dispatched to an address on Maple Beach Road in the Town of Groveland for the report of an assault. Upon arrival Deputies met with a female victim who alleged that she met with Hathaway in a vehicle for the purposes of purchasing illegal narcotics. During the drug transaction the victim realized that Hathaway had sold her a substance that he packaged and made to look like crack cocaine, but was not. An argument ensued between the victim and Hathaway, and it is alleged that he threatened her with a knife.

It is further alleged that Hathaway pushed the victim out of the vehicle as it began to drive away. The victim sustained cuts and scrapes as a result of falling from the vehicle.  The victim was treated by Livingston County EMS and subsequently refused transport to the hospital.  On April 16, 2021 Mark A. Hathaway, age 26, was arrested and charged as a result of both
investigations with felony Tampering with Physical Evidence, Criminal Trespass, felony Attempted Criminal Sale of a Controlled Substance in the Third Degree, Assault in the Third Degree, Menacing  in the Second Degree, Petit Larceny, Reckless Endangerment in the Second Degree and Prohibited Sale of an Imitation Controlled Substance.

The Judge did release Hathaway on his own recognizance per the law and Deputies did set him free on the felony charge.  In regards to the February 4th incident Hathaway was issued an appearance ticket as the offenses did not qualify for pre-arraignment detention or for bail to be set under the NYS Justice Reform Act.  The Livingston County Public Defender’s Office was present and represented Hathaway at the court arraignment for his defense. The Livingston County District Attorney’s Office was notified but chose not to appear to represent the people.

Both incidents were investigated by members of the Sheriff’s Office Criminal Investigations Division, Patrol Division and Forensic Identification Unit.