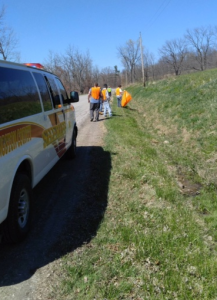 LIVINGSTON COUNTY — The Livingston County Sheriff’s Office is cleaning the highways as part of a new initiative, ‘Operation Litter Bug.’

According to a press release from Sheriff Thomas Dougherty, ‘Operation Litter Bug’ is a two-prong approach to keeping Livingston County a beautiful landscape using the jail’s inmate work crew to clean up the litter and strict enforcement to keep it clean.

“Anyone that lives or travels through our beautiful county knows how picturesque the landscape is,” stated Sheriff Dougherty. “Unfortunately certain motorists litter their trash on our roadways and leave it to others to clean up their mess. This new initiative will clean up the trash and keep it clean by proactive enforcement. Take it as good warning that if you are caught littering, you will be receiving a ticket from a Deputy Sheriff.”

Recently the Sheriff’s Office inmate work crew has been deployed to clean up litter from the side of roadways at the request of citizens. The work crew has logged several hours of dedicated efforts cleaning up trash that has been unnecessarily littered by drivers. The work crew consists of inmates from the Livingston County Jail under the guard of Deputy Sheriffs assigned to the Jail Division.

Deputy Sheriffs in the Road Patrol Division have initiated a zero-tolerance policy. The Deputies will be aggressively enforcing section 1220 of the New York State Vehicle and Traffic Law, which says:

No person shall throw, dump, deposit or place, or cause to be thrown, dumped, deposited or placed upon any highway, or within the limits of the right of way of such highway, or upon private lands adjacent thereto, any refuse, trash, garbage, rubbish, litter or any nauseous or offensive matter.’

Fines are up to $350 and/or community service for a firsttime offense.

Typical littered items that Deputies will be strictly enforcing are fast food wrappers, cigarette butts, bottles and cans, newspapers and garbage bags but any item considered trash that is littered on the highway will be enforced.