Deputy Doe has worked at the Livingston County Sheriff’s Office for over eight years. She started in the Records Division as a civilian clerk and transitioned to the Correctional Services Bureau, specifically the Jail Division as a sworn Deputy Sheriff.

Her current duties include safety and security for all those that enter the Livingston County Courthouse, keeping order in the court room and protecting the judges as they move about the building.

Deputy Doe is trained in CPR, First Aid and AED, Taser Operator, Firearms Certified, as well as many other training programs. She is a Grievance Coordinator and a Classification Deputy.

Deputy Doe is compassionate, respectful, courteous and a great listener. She is able to deliver those skills to the courthouse, helping all those in need. One of her most satisfying moments at work is when she can encourage someone going through a tough time.

Deputy Doe has volunteered for Victim’s Impact for years and has spoken at high schools and colleges on the topic of “Good Kids Making Bad Choices” and currently speaks with high school students at the Sheriff’s HERO program combatting heroin in our communities.

She is also one of the first females to serve on the Sheriff’s Office Honor Guard.

Deputy Doe graduated from Caledonia-Mumford High School, she volunteers at her church and she is a 4-H Leader. She lives in the Dansville area, is married and says her “proudest job” she has ever held is raising five beautiful children!

Please join us in recognizing Deputy Doe for her public service to Livingston County! 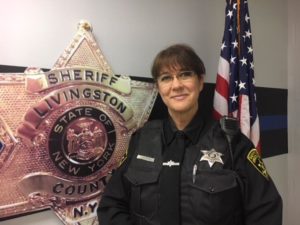